When a book makes you sit back and go, “Wow! That’s a piece in the puzzle I didn’t even know I was missing.” It’s an important book. “The Burden of God” is precisely that kind of book. Michael W. Kelley answers a host of questions. Why does Ecclesiastes seem to contradict itself? How is this book “…profitable for teaching, for reproof, for correction, and for training in righteousness…” so that we can be “…equipped for every good work” (2 Timothy 3:16-17)? 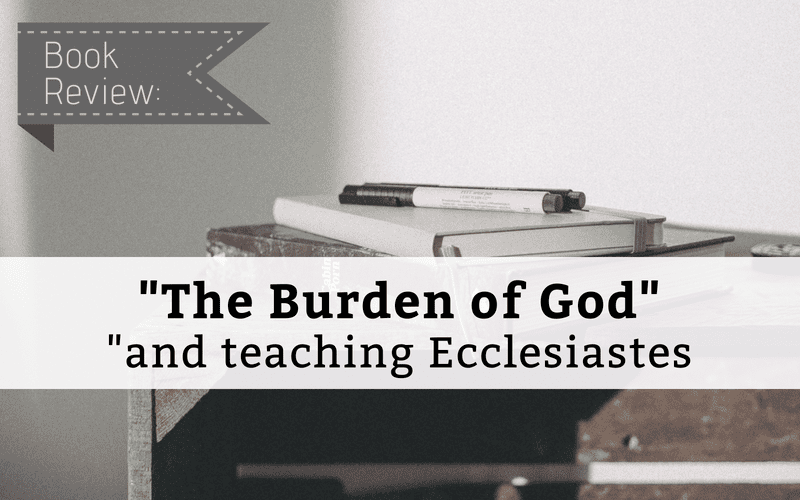 What is Ecclesiastes all about?

Being Reformed Christians, various commentaries exist in our tradition. One book that tends to elude many commentators is Ecclesiastes. Some take this book of the Bible as the crotchety complaints of a hardened older man. Others say it is an accurate nihilist approach to life without Christ. All they teach no matter what chapter is a sort of academic-sounding, “don’t get high on drugs, get high on Jesus.”

The fact that we have such a mishmash of approaches to what should be an encouraging book for God’s people is not a book problem, but a mess caused by sinful presuppositions.

Ecclesiastes says nothing about “God’s love.” It is silent about His compassion and sympathy for hurting and ailing human beings. It lacks every indulgence of our present-day maudlin self-preoccupation. Instead of being warm, uplifting and positive, its message is cold, harsh and negative. How could something that is so insensitive to our pre-defined emotional and psychological needs possibly have anything useful to say? Not surprisingly, while Christians may accord it a place in their Bibles, they scarcely find room for it in their hearts and minds. For most, it remains a closed book.

We ask a text to fit our mold, and if it doesn’t, we either relegate it to the background or mystify it (as seen among the “Jesus is the answer” crowd). Pick any of these approaches taken by most commentators, writers, and preachers, and they all seem to miss something. Ecclesiastes is a divinely inspired covenantal document representing the worldview that weaves through the whole canon of Scripture.

No matter the approach to the book, something that slaps the reader in the face is the theme of vanity. The problem with the methods of interpretation above is that they apply the vanity to the wrong things. In Chapter 1 of Part 2, The Root of the Problem, Kelley guides us in understanding what exactly “vanity” means, something as meaningless or utterly useless.

1. “We, for our part, shall insist that the Preacher’s words are grounded in the covenant, that he means to speak from the standpoint of the Solomonic wisdom, which is the Biblical standpoint in its entirety as he understood it.”

a. “This includes the promise to Abraham, the laws of Moses, and everything that pertains to the difference between Israel and the nations.”

2. “…the Preacher views sin and its consequences to be the root of the problem, not the fact that man is finite. This most basic problem of man involves the creation in its totality.”

a. “Man lives under a curse which affects his life in every sense.”

3. “When the Preacher claims to speak as a disciple of Solomon he is saying that the answer lies in God’s redemptive program.”

a. “Man must be made to see that a solution to his problem must involve the total renewal of the creation.”

b. “Apart from this all man’s life is vanity and meaninglessness.”

The root problem of vanity is not our creaturely-ness or mortality, but sin. Uselessness is not inherent in getting wisdom, governing a country, saving, spending, and all the other activities covered in Ecclesiastes. Uselessness is going about these things with man-centered motives and means. Ecclesiastes is a book that attacks the wisdom of man in every endeavor and calls the covenant community to walk out all of life with the Wisdom of God.

The Structure of the Book

“The Burden of God” is divided into two sections. The first section is titled “The Context” and the second “The Text.”

The first section is putting together the covenantal worldview of Scripture. The wisdom of Solomon weighed against the wisdom of pagan nations. The wisdom of Christ and the antithetical wisdom of the Greeks. To summarize the first part:

But the Preacher does not leave matters there. He addresses the covenant people with positive words of hope. Reminding them of “the burden of God” (v.10), he directs their thoughts to God’s covenant faithfulness—“He has made everything beautiful in its time.” (v.11) It is his way of saying that God will ultimately make all things beautiful in time. God can do so because He alone is lord of man’s time. It is not their task, then, to be gods over time. They must entrust themselves to God instead of attempting to “fathom” God’s doings.

God is faithful in difficult times, and His faithfulness is the promise that assures us of covenant blessings for our loyalty. We cannot master time, but we can submit to the master of time, knowing he will make it “beautiful in its time.” Or, as the New Testament puts it, “And we know that for those who love God all things work together for good, for those who are called according to his purpose.” (Romans 8:28)

However, this is no encouragement to idleness and passivity, for the Preacher issues a positive order for what God’s people should do with the time God gives them. “…there is nothing better for [covenant] men than to be happy and do good while they live…[to] eat and drink, and find satisfaction in all his toil—this is the gift of God.” (vv. 12f) God calls His people neither to control time nor to escape time, but to use their time “while they live” to do good.

The fruition of God’s faithfulness in time, of the seemingly lack thereof, is no reason for slack hands. As covenant people, we can work, eat, and be happy with the satisfaction that our faithfulness to God in all these things is not vain, vaporous, or useless.

The Preacher well knows that the only good God recognizes is that which conforms with His law-word. David had certainly recognized his responsibility in this regard, for he confesses, “My times are in your hands….” (Ps. 31:15) In Ps. 34:1 he adds, “I will extol the Lord at all times….” Moreover, the good that David would perform was found in God’s law, for he declares, “My soul is consumed with longing for your law at all times.” (Ps. 119:20) Again, “Blessed are they who maintain justice, who constantly [i.e., at all times] do what is right.” (Ps. 106:3) It is this injunction that was also on Paul’s mind when he wrote, “Be careful, then, how you live—not as unwise but as wise, making the most of every opportunity [i.e., redeeming the time]….” (Eph. 5:15) The covenant people are to live responsibly before God. To bolster their confidence in this respect, the Preacher concludes that “everything God does will endure forever.” (v.14)

The doing of good, which we are to be satisfied with, is none other than keeping the Law of God. David, Solomon, and Christ’s wisdom have the same ethical standard of “good”…the revealed Law-Word. Our doing of His will is the activity of God through representation. The lawful works of God’s people endure forever.

God does not give man sovereignty over time, because God wants men to “revere Him.” (v.14) And we can be certain that the works of righteousness we perform, as well as the deeds of wickedness that men do, will be remembered, for “God will call the past to account.” (v.15)

The wickedness that we remain faithful under will be punished in due time. On earth and in heaven.

Rushdoony summarizes the matter well: “For the believer, time is God’s appointed area for man’s opportunity and fulfillment… The Christian is a pilgrim who refuses to find permanency in time… In Christ, who is his redeemer, he finds his newness of life and the marching orders for time, so he is fixed as to his faith, and on the march in time.”

Time is the opportunity to mature into the full man, Jesus Christ. We do not fight the fight of faith to hold our ground or return to a former state. We put sin to death through Jesus Christ, fight tyranny and injustice with obedience to God’s Law, and march forward in hope.

Thoughts To Take Away

One thing I would like to see after every section of exposition, or at least after every chapter, would be ethical/judicial applications for self-government, family government, church government, and civil government. Review questions could be a great project for groups reading through the book together. An applicable study guide to Ecclesiastes based on the exposition from The Burden of God would also be handy.

If I ever hear one of my friends say they are going through this book of the Bible for self-study, Sunday School, or a sermon series, I will throw this book into their lap (or email them a pdf).