Crumbs from the reading table is a post of gleanings from my recent readings—from books to articles. Every gleaning will be long enough to spark some thoughts but short enough to finish during a bathroom break. 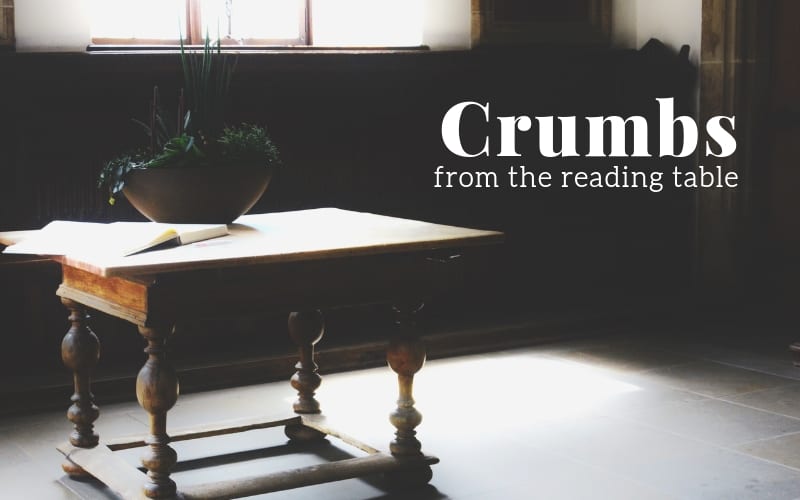 but the earth remains forever.

The sun rises, and the sun goes down,

and hastens to the place where it rises.

The wind blows to the south

and goes around to the north;

around and around goes the wind,

and on its circuits the wind returns.

All streams run to the sea,

but the sea is not full;

to the place where the streams flow,

there they flow again.

For those who are in and faithful to the covenant, the created system is a blessing. Instead of cycles of vanity, mist, or uselessness, they are the foundation for productivity. God’s order for the world is not an obstacle to overcome but the domain in which man is to rule over as God’s representative. It’s an object to better and present to God as a thank-offering.

These cycles are vexing for those outside the Covenant of Grace who don’t submit to God and receive His grace. The created order is a burden upon autonomous men. Man, outside of Christ, wants to be his own God. They either want man to control nature or use nature to control man. For the covenant rebel, birth and death, the rising and setting of the sun, air currents and their finicky attitude, and the water cycle all kick back at this lustful ambition.

The activities of the created world, sustained by God, are a reminder to man that he is not in control. Nature will not change for man to build enduring value, but he must submit to the system of God per His Law. Nature’s cycle will not allow unbelieving humanity to claim perpetually enduring results from his labor if at odds with His ethics and world.

These warnings of John the Baptist are not the vague and indefinite exhortations to repentance, addressed to men in all ages, which they are sometimes assumed to be; they are urgent, burning words, having a specific and present bearing upon the then existing generation, the living men to whom he brought the message of God.  The Jewish nation was now upon its last trial; the second Elijah had come as the precursor of ‘the great and dreadful day of the Lord:’ if they rejected his warnings, the doom predicted by Malachi would surely and speedily follow; ‘I will come and smite the land with the curse.’  Nothing can be more obvious than that the catastrophe to which John alludes is particular, national, local, and imminent, and history tells us that within the period of the generation that listened to his warning cry, ‘the wrath came upon them to the uttermost.’

John’s warnings of smitten and cursed lands are often identified as future—sometimes far-future—predictions. One thing J. Stuart Russell highlights in his book The Parousia is the connection between Malachi’s prophecies regarding The Day of the Lord and John’s warning of the readied ax and looming winnowing tool. On this point, Russell writes,

Indeed, his own recorded utterances speak far more of wrath than of salvation, and are conceived more in the spirit of the Elijah of Malachi, than of the wilderness-herald of Isaiah.  He warns the Pharisees and Sadducees, and the multitudes that crowded to his baptism, to ‘flee from the coming wrath.’ He tells them that ‘the axe is laid unto the root of the trees.’ He announces the coming of One mightier than himself, ‘whose fan is in his hand, and who will throughly purge his floor, and gather his wheat into the garner, but who will burn up the chaff with unquenchable fire’ (Matt. 3:12).

These warnings were not so much future in nature but immanent to the lives of those living. Understanding the difference between the two helps with exegesis, but it also provides applications for today. Fulfilled prophecies don’t go to waste, nor do they only inform us of God’s trustworthiness. They also tell us of convictions and actions in similar situations that ought to be believed and done.

The practicality of Jesus’ warnings

For example, Jesus told His disciples “to occupy” (do business) until He comes (Luke 19:13)—coming in judgment, not a physical return. Jesus also told them of the ability to flee quickly during His pouring out of wrath (Matthew 24:15-19). When mass conversions of people in Judea, and those visiting, during Pentecost, it makes sense that local landowners sold their property (Acts 4:32-37). Not only did they want to care for the poor, which is a complete reversal of the Pharisees’ abuse and oppression of the poor, but they also providentially were prepped for fleeing Judea’s coming destruction—less immobile assets.

The new Christians who traveled to Judea went back to their countries and continued to do business and engaged within the market. This is how Christians from various churches outside of Judea sent back financial support (alms and poor tithes) during famines.

So what? First, fleeing is a totally biblical strategy. Second, immobile assets, like land, are excellent for building legacies. However, in a wicked culture deserving God’s covenantal curses, movable assets (sound money) and charity (something God blesses) are appropriate covenant investments.