Why Does The Preacher Say Knowledge Is Vexing? | Ecclesiastes 1:14-18

In chapter one, verses 1 through 13, Ecclesiastes teaches us that outside of obedience to God, work is vain, mist, useless. The work of man, who is under the curse of God, cannot solve his problems through the very thing that is cursed, his work. Last week, we talked about how there is work that is not vain, and that is work in conformity to God’s ethics. Now, why can’t we fix our root problem? Can anyone? Are we better off knowing the problem even if we can’t fix it? 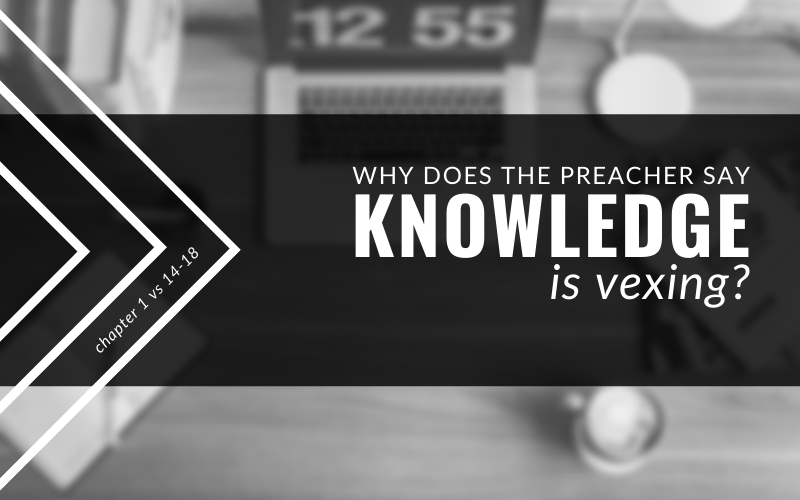 I have seen everything that is done under the sun, and behold, all is vanity and a striving after wind. What is crooked cannot be made straight, and what is lacking cannot be counted.

The Preacher carries on his unrelenting attack against the autonomy of man, humanistic wisdom, self-salvation, and social engineering. Now, he doubles down on the crux of the matter—the curse of God on man for his rebellion. The wisdom of man-centered thinking cannot remedy the curse.

The word for “crooked” is ‘âvath. This word shows up 11 times, and they highlight the seriousness and scope of man’s crookedness. For example,

The list above is indicative of the degree of man’s is corruption. Why do these things happen? We are morally and religiously corrupt down to the core. Man’s wisdom will not remove the curse in our bones, and it can hardly diagnose the problem.

He who makes the crooked straight

Furthermore, the Preach explicitly tells us that the crookedness cannot be “straightened” (tâqan). Why can’t man straighten himself?

Consider the work of God: who can make straight what he has made crooked?

God curse results in our moral bent-ness. No man, or idol of his invention, can unbend the sinful nature of man.

Stop! Can’t you see the hope in this text? What God has bent man can’t make straight, but God is more than able to do so. We have here the hope of redemption. Although, it is not overt due to the Preacher’s focus on the hopelessness of humanism.

Solomonic-wisdom is rooted in the forgiveness readily available in God’s covenant. Solomonic-wisdom is perfectly followed, applied, and manifested in Jesus Christ. When we enter into the Covenant of Grace through Christ, our crookedness gets straightened. We can establish work (‘âbad; service) rather than vanity (âmel; mist).

For we are his workmanship, created in Christ Jesus for good works, which God prepared beforehand, that we should walk in them.

The personal nature of straightening things is an encouragement for those in the covenant.

Besides being wise, the Preacher also taught the people knowledge, weighing and studying and arranging many proverbs with great care.

The word for “straight” in our text is the same word for “arranging” here. As the Preacher applied his wisdom to arranging proverbs, God “rearranges” our bent nature. The Father sent the Son, Who sent the Spirit, to redeem man and the world for His glory. God desires to “put into order” humanity.

The crookedness of man is comprehensive. Similarly, so is the scope of God’s straightening out of men. Remember all the usage of ‘âvath we covered? The majority of the word’s occurrences point to the perversion of justice in the courts. In Ecclesiastes 1:3-13, we covered that man-centered works and wisdom are vain, useless, a mist. The result is “crooked” justice and abuse in the courts.

This promise of renewal in Christ is not only for the individual. As individuals and families come into the covenant, and nations are discipled, justice systems will be straightened out by God.

What is the blueprint for the restoration of justice? God’s Law. He lays out the judicial principles and processes for just courts—the penalties for slander and false witness, as well as fraud and other forms of theft. Nations now look for complex statutes, policies, and regulations to solve the crookedness of man. We know these won’t succeed because they don’t deal with God’s curse, or submit to His covenant.

The vexation of wisdom

I said in my heart, “I have acquired great wisdom, surpassing all who were over Jerusalem before me, and my heart has had great experience of wisdom and knowledge.” And I applied my heart to know wisdom and to know madness and folly. I perceived that this also is but a striving after wind.

For in much wisdom is much vexation, and he who increases knowledge increases sorrow.

The Preacher, after critiquing the humanistic means to lift the curse of God, moves to something vitally important. Something that those who submit to Solomonic-wisdom must not fall into. Presumptuous confidence.

Covenantal wisdom’s power and effectiveness are more potent than autonomous man’s, but there is still a sense in which it is powerless. Although the Preacher could identify man’s fundamental problem, it could not get rid of it. Solomonic-wisdom in and of itself could not straighten out the crookedness of man. If this is true of wisdom in submission to God, how much more disobedient wisdom.

Solomon, and the wisdom he received from his forefathers, passed down to his descendants and implemented here by the Preacher. All of this pales in comparison to Christ. Jesus was Solomonic-wisdom made flesh. Michael W. Kelley writes,

Wisdom—even Solomon’ s—is of no value if it cannot permanently correct the sinfulness of man…If men would heed Solomon, they will be compelled to hope in Christ.

The “vexation” of the Preacher can be confusing. The confusion comes from forgetting something – where he falls in history. Solomonic-wisdom could point out the root of man’s burden, the curse of God. However, the Preacher couldn’t remedy it. Pre-Christ, crookedness could not be eliminated. During the Preacher’s day, the more Solomonic-wisdom you gain, the more frustration you have with the sinful working of men.

For us today, after the reforming work of the death, resurrection, and ascension of Jesus Christ, its different. Exasperation is not our outlook. We can access the root of individual and societal problems, and we have the solution in Jesus Christ. Jesus de-roots the curse of God in man, which allows him to conform to God’s ethics with thankful obedience.

Solomon was the wisest man before Christ. The Preacher applied Solomonic-wisdom to cultural and religious critique. Jesus Christ manifested the solution for the things critiqued.

When dealing with injustices committed by individuals and governments, the answer is not new politics, new laws, or revolution—all of these compound evil. The solution is submission to Jesus Christ by both men and nations.

After the curse is dealt with, and the crooked made straight, then new politics, laws, and reformation will take place.

Below is one example of ignoring the curse in solving problems.

We could make this list more exhaustive. However, the Preacher’s point rings true. Man trying to fix crookedness in the world without dealing with the crookedness in the heart is useless. The curse abides. Vexation increases. Injustice continues.

Self-government under Christ and free from the curse

We cannot overlook the importance of self-government. After the sovereign government of the world by God, the next sphere of government is “self” under God. Without individuals submitting to Jesus Christ through the Gospel, the bent nature in man will perpetuate fallen humanity’s self-destruction (example above).

But in fact Christ has been raised from the dead, the firstfruits of those who have fallen asleep. For as by a man came death, by a man has come also the resurrection of the dead. For as in Adam all die, so also in Christ shall all be made alive. But each in his own order: Christ the firstfruits, then at his coming those who belong to Christ. Then comes the end, when he delivers the kingdom to God the Father after destroying every rule and every authority and power. For he must reign until he has put all his enemies under his feet.

Furthermore, advancing the thought in the previous applications, we must be optimistic. To fall victim to pessimism is a denial of redemptive history. Why would I say that? Don’t forget! Ecclesiastes is pre-Christ. With that in mind, what is the Preacher’s only critique of Solomonic-wisdom? It could not remove the curse. However, the Remover came. The solution is now at hand for application.

What room is there now for pessimism? Towards the close of Warfield’s The Millennium and the Apocalypse, he writes,

The Gospel assuredly must be preached to the whole world as a witness, before the Lord comes. These visions seem to go farther and to teach that the earth – the whole world – must be won to Christ before He comes: and that it is precisely this conquest of it that He is accomplishing during the progress of this inter-adventual period. (emphasis mine)

We end with the Preacher’s declaration of frustration. Man, even when able to diagnose the root of the problem through Solomonic-wisdom, cannot solve the issue. The preacher doesn’t stop his investigation here. Next, we will join the Preacher in asking, “Can a man find pleasure in spite of his irreparable problem?”