In Ecclesiastes, the Preacher first sets his target on the useless (vain) efforts of humanistic man (who is outside of and in rebellion against God’s covenant) to escape the curse of God. The Preacher moves to critique the social order these men built in their effort to become their own gods.

Why did the Preacher see this a fit subject to address? First, God created mankind to build communities (Genesis 1:28), ranging from families to societies. Second, looking from a distance at the power of her neighbors, Israel might be tempted by their social order. If she succumbed, it would be disastrous to the ethical and judicial principles for society God revealed in His law. Third, the crookedness of man (Ecclesiastes 1:15) erodes any attempt of man to establish justice outside of God’s covenant. Fourth, God’s judgments will be a cure to those outside the covenant and a blessing to those within. 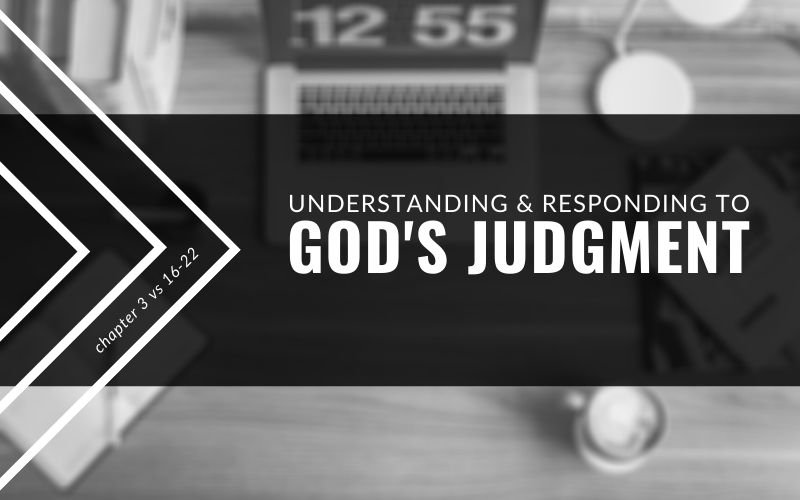 The courts of man

The Preacher begins with the conclusion. There is wickedness where righteousness belongs. He doesn’t dig into why this is but points out where their efforts end. Michael W. Kelley writes,

He merely concludes that wherever one looks “under the sun,” there, man in his self-declared independence from God cannot realize the perfect (read: “just”) society which he confidently expects to attain. Man’s efforts at civilization are suffused with injustice as a result of his rebellion, not from time to time, but everywhere and always.

The warning to Israel was clear. Don’t seek the justice of men who cannot submit to God’s court. This lesson is echoed when Paul writes,

When one of you has a grievance against another, does he dare go to law before the unrighteous instead of the saints? Or do you not know that the saints will judge the world? And if the world is to be judged by you, are you incompetent to try trivial cases? Do you not know that we are to judge angels? How much more, then, matters pertaining to this life! So if you have such cases, why do you lay them before those who have no standing in the church? I say this to your shame. Can it be that there is no one among you wise enough to settle a dispute between the brothers, but brother goes to law against brother, and that before unbelievers? To have lawsuits at all with one another is already a defeat for you. Why not rather suffer wrong? Why not rather be defrauded? But you yourselves wrong and defraud—even your own brothers!

Or do you not know that the unrighteous will not inherit the kingdom of God?

What is the reasoning behind keeping our “grievances” with one another out of courts that do not operate by God’s ethics? First, we are going to judge the angels. We should be able to judge our conflicts with each other, according to God’s revealed case laws found in Scripture. Second, Paul shows that, because of the practices of the ungodly, both personally and legally, they will not inherit the “kingdom of God.” Regeneration is necessary for the kingdom, and following the logic of this verse, it’s a requirement for righteous judgment.

In Matthew 28, Christ teaches us that our job, quite literally, is to “teach the nations.” The curriculum is all that He commanded. One way we do that is through establishing church courts. This is a testimony to the “ungodly,” those who labor under God’s “curse.” There are judicial blessings in God’s covenant: peace, reconciliation, and restitution. Isaiah 57:21 says that the wicked are like a turbulent sea — they only muddy the water and lack peace. Amos 5:7 paints the picture of turning justice into wormwood, which is saying it became bitterness, and righteousness like trash on the ground. However, as God’s representatives, our calling is to establish justice. In alignment with 1 Corinthians 6:1-9, God tells us in Amos,

Hate evil, and love good,and establish justice in the gate;

I said in my heart, God will judge the righteous and the wicked, for there is a time for every matter and for every work.

Despite their attempts to create laws and ethics from fiat, which result in oppression and crime, humanist men and societies will not last. In the last chapter, we talked about God’s “times.” The Preacher brings them to mind again and impresses that God has appointed a time to destroy and uproot evil social-orders who will not “kiss the Son” (Psalm 2:12).

If we acknowledge God as both just and sovereign, then we must also trust that God will carry out judgments. And we must realize that this “judging” is historical. God’s justice is not limited to the spiritual realm. God’s sanctions carry out a very “earthy” prosecution. Nations, cultures, and livelihoods are at stake, and the dustbin of history shows that this threat of justice isn’t empty.

Israel was victim to all sorts of man-centered “justice.” When their kings went off the rail, Assyria, Babylon, Persia, Greece (Macedon), and eventually Rome exerted their own “justice.” Most of these, if not all of them, were God’s fulfillment of His promise to judge Israel for abandoning the Law and becoming a tyrant to themselves. However, these “times” of judgment, or “breaking down” (Ecclesiastes 3:3), were momentary and had a decided terminus. Even though they were used as the means for Israel’s punishment, Assyria, Babylon, Persia, and Rome also met with God’s judgment.

With that in mind, Israel shouldn’t have been tempted by the momentary prominence of ungodly social orders. But God, knowing the thoughts of man (Psalm 94:11), saw fit to address their temptation through the Preacher. The Preacher urges Israel to maintain her hope in God’s covenant and invest in obedience to His Law, understanding that “times” of suffering under men’s injustice are limited by God’s sovereign plan. Righteousness will reign over wickedness.

The Preacher is telling Israel,

Be strong and courageous. Do not fear or be in dread of them, for it is the Lord your God who goes with you. He will not leave you or forsake you.”

Be watchful, stand firm in the faith, act like men, be strong.

I said in my heart with regard to the children of man that God is testing them that they may see that they themselves are but beasts. For what happens to the children of man and what happens to the beasts is the same; as one dies, so dies the other. They all have the same breath, and man has no advantage over the beasts, for all is vanity. All go to one place. All are from the dust, and to dust all return.

In continuing the endeavor to encourage Israel to godliness, the Preacher presses on. He picks back up the message of uselessness, in particular, the vanity of building a social-order under God’s curse and in open rebellion to His Law.

This section gets confusing for many people. It may even sound like a PETA (People for the Ethical Treatment of Animals) slogan. (This is the same organization that brought us the classic, “A rat is a pig is a dog is a boy.”) To be clear, this is not the Preacher’s message.

Instead, the Preacher is saying, “When God tests men outside of God’s covenant, and animals, in the effort to develop a just social-order, they are equal.” One author explains that the result of God’s testing is,

…merely to show them that they have no advantage over animals who neither build social orders nor experience justice or injustice. Like the animal, man is destined to die. It is a fate that “awaits them both.” (v.19) In this respect man’s exalted estimation of himself and his ideals are “meaningless.” His purposes cannot withstand the grave and the return to dust.

The reason for this comparison goes back to the first chapter of Ecclesiastes, where we discussed the vanity (‘âmâl) of men outside of the covenant. All their works to establish themselves as their own gods, striving to get out from underneath the curse of God, and trying to establish just social-orders (v.16) when they’re still morally “bent” (Ecclesiastes 1:15) and not willing to be made straight by the Gospel, is useless from the top down. Like building on a foundation of mist.

There is a difference

The Preacher establishes here that the similarity between animals and man is not absolute. We now see one of the many ways in which man and animal are entirely different. To establish this difference, I think we need to look at the NKJV, which I would argue offers a better translation here. “Who knows the spirit of the sons of men, which goes upward, and the spirit of the animal, which goes down to the earth?” (v.21, NKJV).

Once we know the question asked, we know the answer. God knows. The Preacher’s emphasis remains in force — God judges all men, both righteous and unrighteous. How can this be an encouragement from the Preacher? Justice will always be rendered by God against those who war against His Kingdom, though some people and generations may pass without seeing it. Where is the hope of those saints?

All souls of all men will go “upward” to the father, for all men will die, and that is the inescapable appointment for judgment (Matthew 16:27; Hebrews 9:27). God’s people who suffered and died under wickedness will experience liberty in heaven, for they are judged in Christ (Romans 4:23-24; 2 Corinthians 5:21) and also rewarded for their faithfulness (Matthew 5:18-19). Likewise, unrepentant oppressors will ascend and meet their judgment outside of Christ for all the evils committed against God’s people. There is hope, and joy, in the truth that the souls of mankind “ascend” to God for judgment.

So I saw that there is nothing better than that a man should rejoice in his work, for that is his lot. Who can bring him to see what will be after him?

Covenant-keepers, those who obediently abide in God’s covenant, ought to work and find pleasure in their labor. Not the useless (vain; ‘âmâl) work of self-deifying man, but productive and faithful work in submission to God and for His glory. We don’t know when judgment will fall, or if we will be swept up in it, or what part we will individually play, but we do know what God requires of us today — obedience to His Law (Deuteronomy 13:4, 8; James 2:18-26). We are to love God and neighbor (Deuteronomy 6:5; Leviticus 19:18; Matthew 22:36-40), which is fleshed out by His commandments (Romans 13:20).

As we live today, we must not despise the day of small beginnings, or that the blade comes first before the ear of corn. We walk in the promise of God’s justice, and the confidence that God’s judgments are perfectly executed through His providence. As the Preacher has taught us, God makes “everything beautiful in its time” (Ecclesiastes 3:11). A society’s culture begins in the hearts of the people. Ronald Kirk writes,

Christians should exercise godliness in such a way that we benignly work the soil of our neighbors’ hearts through godly influence, accomplished according to our spiritual gifts. Thus inspired, we will do all we do, self-consciously, to the glory of God (1 Corinthians 10:31), to fulfill the Great Commission of Matthew 28.

We, as the Church, establish justice and do justice by treating our neighbor lawfully, defending their liberty, and by serving them according to their needs.