The Preacher’s admonition for God’s covenanted people carries over from the text we covered previously (Ecclesiastes 5:1). Last time, we considered the need for self-control to approach God and His revelation and that sacrifice without obedience is worthless.

While the last post focused on restraining our speech before God, the Preacher now focuses on our communication with others and the importance of vows. 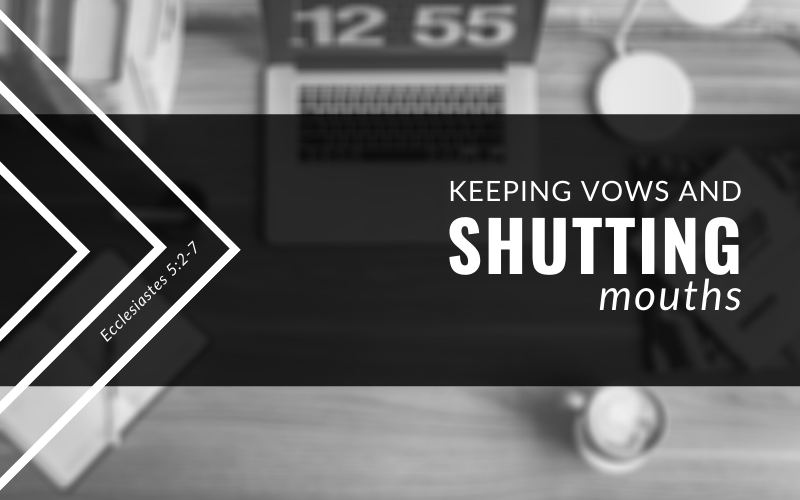 Out of the mouth

Be not rash with your mouth, nor let your heart be hasty to utter a word before God, for God is in heaven and you are on earth. Therefore let your words be few. For a dream comes with much business, and a fool’s voice with many words.

High treason in a torrent of words

From the vantage of Solomonic-wisdom, speech is ethical. Hastiness in heart and speech signifies a lack of self-control, which is what the Preacher called previously (v.1). Without godly meekness in communication (Galatians 5:22-24; Colossians 3:12-13), how can a person submit to God in all things? The “tongue” is like a rudder directing the whole man’s ethical life (James 3:2-5), and it also reveals the “treasure” that fills one’s heart (Luke 6:45). If one’s heart and speech are not in submission to God’s Law, then he will not submit to His lordship.

Boastful or arrogant speech, which comes from the “abundance of the heart,” claims that only the speaker is their authority and judge (Psalms 12:3-4). Fearful or anxious speech, which overflows from the heart, leads God’s people to disobey commands and reject his promises (Deuteronomy 1:26-33). Speech, which seeks to set oneself as a paragon of godliness, considers the prayers that overflowed from the heart of the Pharisees (6:5-8), which leads to neglecting the weightier matters of the Law (Matthew 23:23).

The rash man’s hasty heart, words, and actions are not meek (literally harnessed) under God. His speech is but the beginning of His treason.

When the preacher mentions the “dreamer” (v.3), there are a few options before us. The positive option refers to when God gives a predictive dream, such as the dream given to Joseph (Genesis 37:10) or Nebechinezer (Daniel 2:1-3). The negative option is that the “dreamers” the Preacher references are the false prophets that God warned Israel of through Moses (Deuteronomy 13:4-6).

I am convinced that the “dreams” here are the dreams from the negative example — false prophecy or revelation. The giveaway is that these dreams result in “business,” employment, or affairs. You’ll only find this word in Ecclesiastes, and it is always used with those disobedient to, or outside of, God’s covenant (Ecclesiastes 1:13; 2:23, 26; 3:10; 4:8; 5:13; 8:16). The wickedness of speech unrestrained by God’s Law is a morally bankrupt as false prophecy.

We are queued to the fact that rash and hasty speech comes from the same place that drives humanistic man to build their own society with their own wisdom — the desire to be their own god in an attempt to lift God’s curse. Speech unrestrained is a tacit admission to self-deification.

The Preacher urges Israel towards self-government in their speech, the reason being that God reigns from heaven with all authority. His revelation should silence our words into humble hearing (v.1). Why?

There are many reasons, but the explanation extended here is God’s sovereignty. God’s Word takes precedence in every human endeavor man attempts under the Son. Like Ecclesiastes 3:16-4:16 taught, the wisdom of man cannot effectively build a moral social-order. Israel had, at this point, skirted obedience in many ways and faced mounting temptation to follow the veneer of success found in foreign gods and governmental systems. The Preacher reminds them that God’s reign is total and overall (Psalm 47:2; 103:19).

God’s Word must be brought to bear on covenant-man and the totality of his life, including from taming speech to building societies.

When you vow a vow to God, do not delay paying it, for he has no pleasure in fools. Pay what you vow. It is better that you should not vow than that you should vow and not pay.

The essential aspect of a vow to God is that of a binding contract to God. In its usual form or occurrence, it is a promise to do something in return for a fulfilled request or appeal. There is only one godly vow that is revocable according to biblical law, and that is the free-will (charitable) offering a woman makes, which can be revoked by either a husband or father.

A helpful summary of biblical vows is provided by Michael A. Eaton:

Men who are less than righteous will defer a vow due to situational settings. They aren’t as well off after God fulfilled his end of the vow, or some other excuse will be proffered to defer or neglect to pay or deliver their vow to God. The obligation remains no matter the change in context, even if it is vastly different than the one where the vow was ratified. Numbers 30:2 tells us that a vow to God actually binds one soul, and goes beyond the physical setting. In this way, a vow is the most authoritative debt one can voluntarily bind themselves too.

The point here is sovereignty. Making a vow with God affirms it in two ways. First, it is acknowledged that He is able and powerful enough to answer our appeal. Second, vowing to fulfill our end of the appeal in response for, or in preparation of, His accomplishing our request acknowledges Him both as the ever-present and all-knowing judge. He is not only sovereign over history, but also in his relationships in history. This is why denying to carry out our vow to God is not only theft, but it is utter foolishness, the epitome of vanity.

Let not your mouth lead you into sin, and do not say before the messenger that it was a mistake. Why should God be angry at your voice and destroy the work of your hands? For when dreams increase and words grow many, there is vanity; but God is the one you must fear.

Referring again to Eaton, understanding the exegetical difficulty of this text helps understand the main point of the verse:

Hebrew draws no distinction between messenger and angel, so several interpretations are open to us here. Does the verse refer to (i) the angel of the Lord who is called in the Old Testament ‘a man’ or ‘an angel’ but is addressed as divine? Or (ii) to a prophet (Hag. 1:13; Mal. 3:1); or (iii) to a priest (Mal. 2:7); or (iv) to a messenger sent by a priest? One of the last two is almost certainly correct. A voluntary offering vowed to a temple priest is unfulfilled; the temple priest or his messenger comes to enquire. ‘Oh, it was a mistake’ is the worshipper’s evasion. But God sees, and a careless approach to him may bring his anger upon our words and his judgment upon our works, if not immediately (cf. 8:11) at least ultimately (12:14).

Now, even if one takes the messenger to the pre-incarnate Christ that walked in the Garden, met the patriarchs, revealed Himself to Moses, guided the Hebrew people from the cloud while during the Exodus, and filled the tabernacle, the point remains the same if not strengthened. A vow made to God, or under God’s authority with another person (which all oaths are regardless of acknowledging it), God is the ultimate one who holds all parties accountable. This point is reinforced when it is God Himself that angrily destroys “the work of your hands.”

The lack of self-control in our speech, specifically regarding vows, results from a lack of fearing God. Those in covenant with God are in no less danger of judgment when they neglect their responsibilities towards Him than autonomous man. Whether the vow is related to worship, distress from practical needs, or transactional dealings, an off-handed excuse is damnable.

We covered the disobedient “dreams” or “words” rooted in rebellion above. The connection between broken vows and a false source of ethics are not so far apart. The sons of the covenant must keep the fear of God ever before them.

The social life of man is of great concern to God. Vows break down the societal endeavor of God’s covenant: friendships, marriages, families, businesses, civil governments, etc. The covenant man is called to self-government under God in all of life. Self-government is foundational to a just society, and if God’s people cannot exemplify this in their speech, then how can we claim progress in teaching the nations all that Christ has commanded us?