Ecclesiastes’ Meaning For The Productive Christian (1:1-3)

Ecclesiastes’ meaning is a mystery for many. The book throws readers for a loop. And the theme of Ecclesiastes can seem contradictory to itself and the rest of Scripture. Its voice is unique. Ultimately, the question at the base of it all, “What does it mean?” 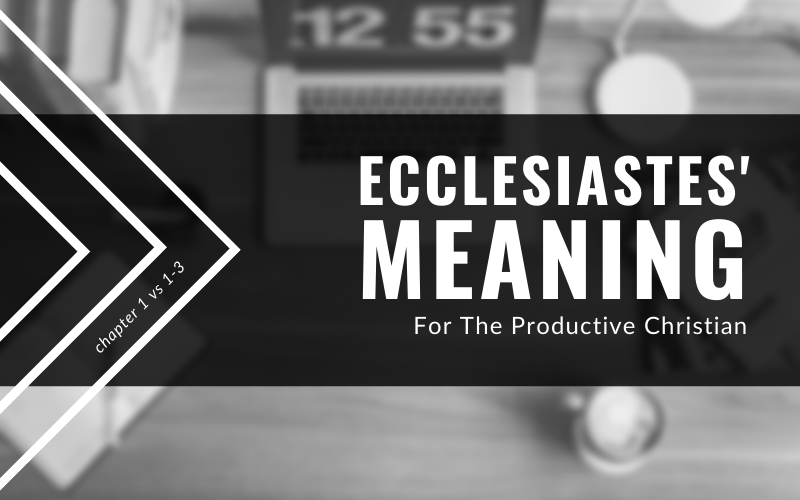 A multitude of approaches

There are different approaches to the book of Ecclesiastes. What’s the culprit behind all these approaches? Before answering, here are the most popular understandings:

If you take the logical man view, it can lead to a detached view of suffering, apathy towards involvement in the cosmic redemption of the world by Christ, and ultimately a hard heart towards others.

The grumpy old-man view justifies the sin of grumbling — the sin of discontent with the sovereignty of God. According to this view, the world revolves around you and your irritations, and the whole world needs to know. And what is the only thing offered? Highlighting obvious problems apparent to most. This person also falls into ungraciousness towards others because everyone becomes the problem.

The Greek-ish approach. Everything is incomprehensible. Suffering and blessing fall from heaven randomly. The prevalent Christian sprinkle on top is that Jesus gives us meaning, which life in the world can never supply. This “Jesus-centered” view provides a little emotional encouragement. But, God becomes a god who does not act objectively in history, nor reveals his objectives to us. Often, this view removes the responsibility to deal with injustices.

The backhand slap view is also Greek-ish in nature. The Greek gods would come to visit man in judgment to put them down. What offense called for this? Jealousy of accomplishment. Not jealousy because the gods love you, but jealousy because you are rival for equal power. They try to put a person in their “proper place.” This leads to the tendency of crushing every wrong thought in your friends and family. “Put ’em in there place!”

This book is in complete conformity with covenantal wisdom. The wisdom God has revealed since the Garden, and that begins with the fear of the Lord (Proverbs 1:7).

From the very first verse of Ecclesiastes, we learn the viewpoint of the book. The author claims to be a student of Solomonic wisdom. Wisdom, that is, rooted in God’s creative and redeeming actions, and is informed by God’s Law. To view it any other way is to call the author a liar.

The book is a primer in wisdom for individual work, inheritance, and culture building.

Why was this written?

The words of the Preacher, the son of David, king in Jerusalem. – Ecclesiastes 1:1

When it comes to Ecclesiastes, authorship debates continue amongst good people. No matter if the author was Solomon or a later teacher who was in the line of David, the situation was the same. Israel’s surrounded by nations stronger and more prosperous. Their gods were a continual temptation to fall into idolatry. The desire for power-religion was palpable.

If Solomon is the author, his reign was weakening and family disintegrating (to be seen in his son’s rebellion). False religions and altars dotted the land of Israel. Apostacy was creeping at the door. If a later son of David wrote it, the situation was similar. It would be after the post-exilic period. Powerful nations would pop up all around Israel, and as their prominence increased and outpaced Israel, the temptation to follow their gods grew. Power has always been a focus of idolatry.

There are a few reasons why I doubt Solomon is the author of Ecclesiastes. There is no historical reason to believe it is. When Solomon’s son takes the throne, people complain that their father was harsh towards them (1 Kings 12:1-15). False idols and their altars remained in the land, and with how hardcore the author of Ecclesiastes is when critiquing humanistic man, repentant Solomon would have removed them from Israel. There is no hint in Scripture that Solomon repented anyway.

The curse of God

The literal word for vanity is “vapor.” The best translation is “uselessness.” This uselessness isn’t due to people being finite, nor is it a conclusion of nihilism. The meaninglessness of cultural building is because of the curse of God. Failed cultures, who did not align themselves with God’s covenant, failed because the Triune God acted against them.

Many consider this verse as the central theme of Ecclesiastes. However, the main idea is in verse 13. The Preacher is starting with the problem, the curse of God. Way beyond his time, he is already doing a common communication tactic. Start with the issue, draw it out, then deliver the resolution. The Preacher is emphasizing the uselessness of man-centered efforts, which he assumed his audience would recognize comes from sin, as a sub-theme to highlight the central point.

So what is the takeaway of this verse? The curse of God is all-encompassing. Therefore, the solution must also be comprehensive.

The reason why this book seems so negative, so pessimistic, is that it is mainly a critique — a full-on attack of unbelieving thought. For the majority of the book, the Preacher is stepping into an ungodly worldview to show how foolish it is. In other words, “Answer a fool according to his folly, or he will be wise in his own eyes.” (Proverbs 26:5)

To work or to work?

What does man gain by all the toil at which he toils under the sun? – Ecclesiastes 1:3

Does this mean what we do is pointless? Is there no meaning for us while on the earth? Must we wait ’til heaven for purposeful productivity? Not at all! Work is not the target here. Work that is contrary to God is the target.

For many, the confusion surrounding this verse comes from the fact that the English word “toil” appears twice, but in Hebrew, it is two different words.

The word highlighting the Preacher’s point is עָמַל (‘âmal). The connotation is that of severe work, which is ultimately vexing or exasperating. It gets nowhere, accomplishes little, and provides no meaning for the future. This verse reads as, “What can you achieve with pointless work?”

The works of people are rendered meaningless by the curse of God. Don’t forget that the Preacher is not focused on individuals only, but also civilizations. Israel as a whole in this case. The phrase “under the sun” gives us the scope of God’s curse upon rebellious men. It both signifies every kind of work covered by the dominion mandate, and also the area Adam was set over. What is “under the sun?” Everything. All of man’s work, everywhere it’s done, the curse of God followed.

Work that is at odds with God’s Law becomes vain under God’s curse.

God made man and tasked him to work, or “serve,” the Garden. Service is the necessary tool of obeying God’s dominion mandate, “Be fruitful and multiply and fill the earth and subdue it, and have dominion…” Work is a necessary component of the image of God. Work in submission to God is not vanity or without gain. It has meaning and produces results.

What is work in submission to God?

We find the same Hebrew word for “work” or “service” in the fourth commandment: “Remember the Sabbath day, to keep it holy. Six days you shall labor, and do all your work…” (Exodus 28:8-9) The assumption is that our work and service in the “soil of life” will result in a harvest. We see this scriptural expectation in the law of the tithes.

The context of the Sabbath-command tells us what working under God means productive works. They are:

Work that isn’t useless toil is work that conforms with God’s Law. The applications of these laws are the case laws of Scripture.

Since the book written from the tradition of Solomonic wisdom, we must assume the following in this book.

First, the foundational problem of man is sin. The source of “vanity,” “vapor,” or “uselessness” is moral and ethical.

Second, the problem of sin affects all of creation or all of life. Notice all the endeavors of man-centered living that the author critiques; learning, building, designing, entertainment, poverty relief, etc.

Third, Ecclesiastes gives us the wisdom to build nations. In giving us the negative ways to make culture, we are guided in the proper way to build culture. The Preacher is not offering a passive way of escape, but one of redemption. He teaches the purpose of man: work, under God, according to His Word, in every part of our life.

What is Ecclesiastes’ meaning for the productive Christian?

First, no matter how valuable your job is or how desirable your time is, if it is not ethically in line with Christ and His Kingdom, it will be rendered useless.

Second, ethics alone will not allow us to get from underneath the curse of God. We need the curse removed from us. We have only one option for this relief: the death, resurrection, and ascension of Christ. If we want the community around us to have fruitful work inherited by future generations, then we must teach the Gospel.

Third, the truth of the two applications above is for society. Power religion (both in religious groups and governments), which looks to coerce creation, man, and everything else, will collapse under the curse of God. The curse, or the burden of God, in both individual and socity, can only be lifted by Christ.