Is The Message Of Ecclesiastes Meaningless? 1:4-13

In the previous sermon, we introduced the viewpoint of the “Preacher.” What are the foundational principles of what he writes? From what system of values does he draw his conclusions? We highlighted the following principles.

First, he writes the covenantal-wisdom of God. The same wisdom found in Eden, revealed in all the covenants, administrated by the Law, and personified by the God-man Jesus Christ. Second, the useless, or vain, toil (‘âmal) is different than the work God commands of us. It’s different from the “work,” or “service,” God tells Adam to do as His representative. This useful, or non-vain, work is clarified in the Laws given at Sinai. Third, Ecclesiastes is speaking primarily at the civilization level, and the personal secondarily. We see this in the purpose of the letter: to keep Israel from apostatizing to foreign gods. However, we know the Preacher addresses the individual. It’s implicit since self-government is fundamental to biblical society.

In this section of Ecclesiastes, the Preacher highlights that nature seems to “preach” the futility of man and his meaningless life. Is that the case? If so, is that his conclusion? Or starting point? 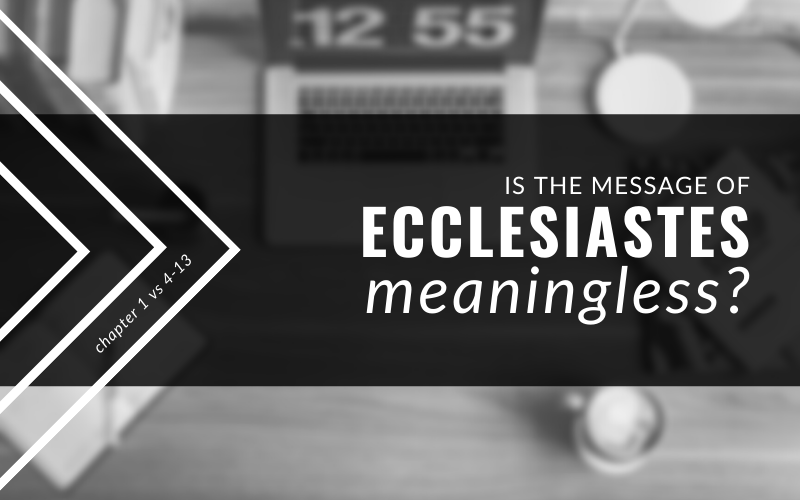 A generation goes, and a generation comes, but the earth remains forever. The sun rises, and the sun goes down, and hastens to the place where it rises. The wind blows to the south and goes around to the north; around and around goes the wind, and on its circuits the wind returns. All streams run to the sea, but the sea is not full; to the place where the streams flow, there they flow again. – Ecclesiastes 1:4-7

The author zeros-in on the nature of the world. God created the world with specific laws that nature must follow unless God intervenes in special cases. We call those exceptional cases, miracles.

Now, how is this an attack on unbelieving thought? To find the answer, you must remember to whom the Preacher was directing his message. The revelation of Ecclesiastes was for Israel, God’s covenant people. It was a warning of the foolishness of the pagan gods surrounding them.

A blessing in the covenant

For those who are in and faithful to the covenant, the created system is a blessing. Instead of cycles of vanity, mist, or uselessness, they are the foundation for productivity. God’s order for the world is not an obstacle to be overcome but is the domain in which man is to rule over as God’s representative. It’s an object to better and present to God as a thank-offering.

Curse outside of the covenant

For those outside the Covenant of Grace, who don’t submit to God and receive His grace, these cycles are vexing. The created order is a burden upon autonomous men. Man, outside of Christ, wants to be his own God. They either want man to control nature, or use nature to control man. However, birth and death, the rising and setting of the sun, air currents and their finicky attitude, and the water-cycle all kick back at this lustful ambition.

The activities of the created world, sustained by God, are a reminder to man that he is not in control. Nature will not change for man to build enduring value, but he must submit to the system of God per His Law. Nature’s cycle will not allow unbelieving humanity to claim perpetually enduring results from his labor, if at odds with His ethics and world.

Round and round we go

All things are full of weariness; a man cannot utter it; the eye is not satisfied with seeing, nor the ear filled with hearing. What has been is what will be, and what has been done is what will be done, and there is nothing new under the sun. Is there a thing of which it is said, “See, this is new”? It has been already in the ages before us. There is no remembrance of former things, nor will there be any remembrance of later things yet to be among those who come after. – Ecclesiastes 1:8-11

For many acquainted with apologetics, the “myth of neutrality” is widely accepted as an apologetic mindset in teaching the supremacy of Christ over everything. The Preacher also holds the “no neutrality” stance regarding unbelieving thought. He attacks, in principle, messianic education, cyclical history, and presumptuous labor and inheritance.

All things are full of weariness; a man cannot utter it; the eye is not satisfied with seeing, nor the ear filled with hearing. – Ecclesiastes 1:8

Loader, in his commentary on Ecclesiastes, translates, “all things are full of weariness,” as “all words are full of labor.” The translation of “things” as “words” is much better. The explanation of “words” which are full of weariness is that humanistic wisdom, wisdom with its authority and meaning originating in man, is wearisome. He is pointing out the futility of anti-Solomonic wisdom, or covenantal-wisdom.

Education that is not obedient to God is often messianic scope. “Education will eliminate immorality, crime, and ignorance! It will create equality!” The problem is they ignore the salvation and ethics of the Gospel, which is the only way to remove the curse of God. Without God’s solution as the basis of education, the burden-curse He placed on man will render all educational endeavors’ âmal, vain, mist, useless.

Michael W. Kelley, in describing humanistic attempt of shaping society through their wisdom,

“Nowhere does man labor with greater energy than in the promotion of his values and his vision for the perfect society. His eyes and ears are always engaged in the quest to learn with the expectation that he will unlock the secret of breaking through the cycle of nature and time and be able to realize a permanent and everlasting condition for mankind as a whole.” – Burden of God, pp 71

Despite thousands of years worth of attempts, a plethora of models and philosophies, unbelieving educators will not accept the disastrous failure to attain their goals. Nor the moral degradation fostered by their unwillingness to root themselves in Solomonic wisdom.

In ancient cultures, they understood time as moving in cycles. It feels like days are moving forward, but really there is no progression in time. Nothing is nothing fundamentally different between tomorrow and today. For example, early- and middle-Egyptian didn’t have a word to talk about the concept of time. Babylonians lacked words for time, sequence, chronology, past, present, or future. Assyrians were missing, in their language, words for history, legacy, heritage, or tradition.

First, this view tends to be pessimistic. Cyclical culture measured their experience in time by tragedies. “That was two earthquakes ago.” This leads to the “cult of safety,” which is a breeding ground for tyrants. As history has shown, these cultures did have wicked rulers. Philosophically, these cultures commonly despaired existence. Sometimes, it was existence as a whole (nihilism), or in part (matter and body as evil).

Second, cultures become static. Since disasters are the markers in the cycle of time, change and innovation become areas of resistance. Progress becomes neutered. Advancement and accomplishment are measured by the degree to which “sameness” is preserved. Technological advancement becomes stunted because “the way we have done it is fine.” The same thing spills over into healthcare, education models, etc.

Is there a thing of which it is said, “See, this is new”? It has been already in the ages before us. – Ecclesiastes 1:10

Humankind struggles with the curse of God. They are always looking for ways to break the cycle, to come out ahead of nature, and to finally establish permanence into the future — this is the idea in verse 10.

“See! It’s new! We’ve broken through the cycle! We’ve overcome the world!” All they’ve done is modify the old in their attempt to get out from under the curse. Their autonomous efforts will nevertheless be rendered useless.

Do not forget the Preacher is building a case against the messianic efforts of man to save himself. The answer to the curse is the same wisdom ideals from creation: the grace of God and obedience to His Law. Man cannot learn from history the answer to culture-building that lasts, he must submit to the Answer — the wisdom of God. Some realize that history is a record of humanistic failure and try to deny history altogether. This is fantasy and nothing more.

There is no remembrance of former things, nor will there be any remembrance of later things yet to be among those who come after. – Ecclesiastes 1:11

Cultures continue by inheritance. The basic to inheritance is passing on a legacy, either in skills, wisdom, or wealth. However, as history would have it, the prevailing trend is that recipients and inheritors of a heritage squander them.

Work for people under the curse, God’s burden for sin, in Gary North’s estimate, is a liability. What is the value of sacrifice now for returns that you have no control over?

I the Preacher have been king over Israel in Jerusalem. And I applied my heart to seek and to search out by wisdom all that is done under heaven. It is an unhappy business that God has given to the children of man to be busy with. – Ecclesiastes 1:12-13

It’s only the beginning!

We now finally come to the main point. Understanding this point changes the book, its lesson, and the applications we can draw from therein. It’s the difference between despair and hope.

What we have here is not the bitter conclusion of a lifelong search for meaning and permanence in a “misty” world. The Preacher powerfully asserts His premise, not his conclusion. His conclusion is at the end of the book and occasionally shines through at various moments.

Solomonic wisdom permeates this premise – wisdom which is covenantally formed in the forge of holiness that is the Triune God, revealed by grace through God’s covenant, ethically defined by Law and proper jurisdiction. His statement assumes the curse of God is a result of sin. The systematic logic of this book is, “Man is under a burden that his efforts cannot lift. Uselessness follows him as everything he builds is mist.” The conclusion is at the end of the book. We’ll get there, but feel free to look ahead!

Education, which is in submission to God’s wisdom and free from the curse, must have a few things in place.

As Christians, we must be historically-oriented. First, every Christian should have a strong knowledge of history. Second, historical failures are not only things to be avoided, but lessons in thinking through solutions or the source of the failure. Third, past successes are not normative for success today. We must analyze them for the principles aligned with God’s Word, and have them shape attempts at success today. Some questions to ask are:

The family is what a culture hinges on, and without it, the transmission of inheritance can and will be hijacked. First, parents should teach their children God’s Word, what it says, means, demands, and promises. Second, parents must teach their children how to apply God’s Word, where specific portions of the Word applies in its proper jurisdiction. Third, parents must provide the opportunity for their children to gain practical skills and trades for them to apply the Word of God and the principles therein.

Feel free to read the first article on Ecclesiastes to learn worldview of the Preacher.