The world is spinning with food fads, movements, diets, “lifestyles,” etc. This is also quite prevalent in Christian circles. However, most of these are just already popular food movements with some fluffy devotional guides, and Bible verses sprinkled on top.

But health and good eating aren’t the issues at stake. 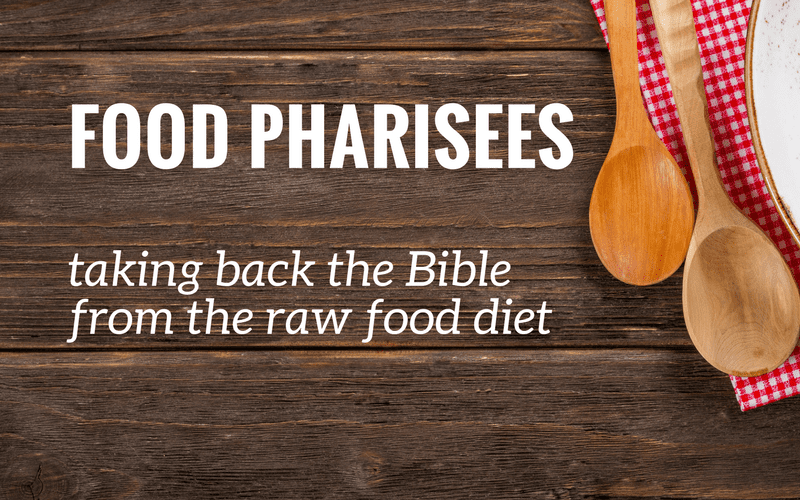 The first problem lies in the arguments for these diets. Proponents draw their case from the Bible, but what would it look like if their arguments were drawn out consistently? What do they imply about God?

Furthermore, how do adherents of the diet view people who do not take on this “lifestyle”? Do they call them ignorant, unwise, or sinful?

And lastly, is the zeal for the food movement distracting us from a more explicit calling?

In this article, I’m going to focus on one fad in particular as it is usually tied directly to the Bible, and I have many friends and family posting and talking about it.

Returning To The Ways of God: Raw Food?

The argument for this diet is that God created our food raw (uncooked), so that is the way it should be consumed. This comes from Genesis 1-2. Proponents argue that the chapters don’t mention that Adam and Eve cooked, or would need to. They had all the fruit of the trees for their food, and the rest grew out of the ground. The primary proof text for this is Genesis 1:29, “And God said, “Behold, I have given you every plant yielding seed that is on the face of all the earth, and every tree with seed in its fruit. You shall have them for food.”

Here are a few questions I have for those using this defense:
– Food was created raw, but does that mean it was meant to be left that way?
– Besides this passage in Genesis, does God say anything else about food?

Let’s look at Scripture and see where this reasoning leads as we answer both questions.

As the subheading points out, the raw food argument proves too much. If the assertion is that the way God created us and our environment is the way we should strive to live, then we have to give up far more than meats and cooked food.

The logic used to enforce the “God-ordained Biblical diet of raw foods” proves too much.

To the list above, some might argue that we made cars and other developments because man advanced in applications of knowledge. Well … the same could be said for cooking your food.

Others might argue that those things had to happen because sin entered the world. The same could also be said of cooking food and eating other types of food.

In addition to Genesis 1-2, there are plenty of instances where God talks about food. I won’t go into all of them here, but I want to deal specifically with a few verses to show what raw food proponents are saying about God in their assertions.

All throughout Leviticus, a lot of meat can be seen. Just read the first few chapters. God calls the smell of cooking meat a “pleasing aroma.” If cooked meats were a sinful thing to consume, our God would not have desired it.

God is gracious. His graciousness is evident in both the Old Testament and the New Testament. One example is that God gave the priests a share in the sacrifices that had been offered. Two primary examples are the Guilt Offering and the Sin Offering.

The eating was to be in a holy place because it was a sacred meal. That means it could not have been a sinful nor unwise thing. If “Christian raw food advocates” say it is unwise to eat cooked meat, then they’re saying the priests (who were obeying God) were being foolish. And since it was God who gave the command, they’re essentially calling God a fool.

Another note of importance is that God sharing His “pleasing” sacrificial meal with the Priests was a gracious gift. God was not required to share. Instead, He required them to receive a gift in these sacrificial laws. If eating cooked meats is sinful or unwise then we contradict what Jesus says,

Or which one of you, if his son asks him for bread, will give him a stone? Or if he asks for a fish, will give him a serpent? If you then, who are evil, know how to give good gifts to your children, how much more will your Father who is in heaven give good things to those who ask him! (Matthew 7:9-11)

Christian raw food advocates who claim this is the biblical, faithful, or obedient diet. If that is so, they are calling God an evil father who gives terrible gifts to His people.

Don’t be holier, or healthier, than God

Here’s the point. If we make commands and standards that God has not made, we make ourselves equal with God. That’s what the Pharisees had done and what Jesus rebuked them for:

“Woe to you, scribes and Pharisees, hypocrites! For you tithe mint and dill and cumin, and have neglected the weightier matters of the law: justice and mercy and faithfulness. These you ought to have done, without neglecting the others.” Matthew 23:23

They had become tyrannical “do-gooders” who took what God had given and added their standards. When we do that (even in “good” areas like health and fitness), we’re putting a burden on ourselves and on our brothers and sisters that God doesn’t ask of us.

If you want to have a raw diet, don’t say you’re doing it because it’s something the Bible teaches. Hopefully, the verses above make it clear that it does not. If you are going to eat raw foods, that’s your choice. Make the decision based on scientific findings, experience, or whatever else. However, claiming that a raw food diet is Biblical is wrong at best, tyranny at worst.