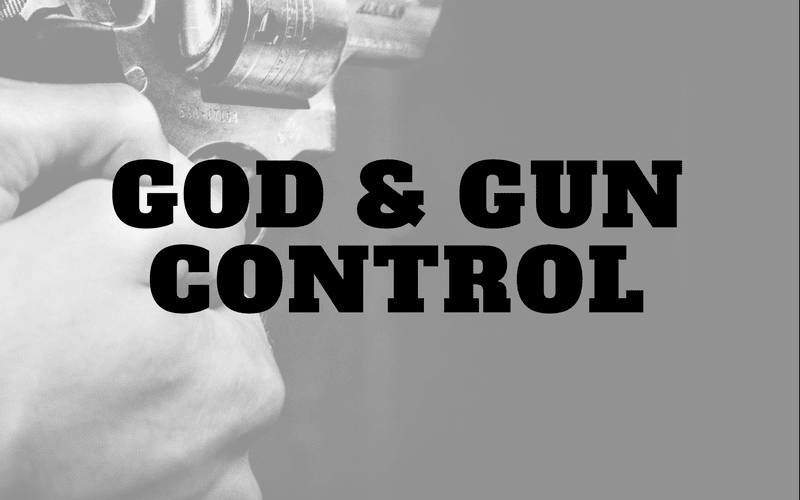 Emotions run high in discussions about gun control. This is even more evident on social media, where most “controversial” topics are talked about because of timidity and fear of face-to-face conflict. People aren’t afraid to voice their opinions when they can simply block commenters who disagree. In the end, we see a lot of discussion with no results.

Some argue that guns need to be removed from private citizens so that there will be fewer victims of gun violence. Others argue that gun control advocates will make more victims by disarming them. Each point a finger at the other as the cause of higher gun crimes. As a result, the debate is less about what should be counted as a freedom and right. Instead, it’s a trial regarding who is guilty of perpetuating gun violence.

As Christians, we should take into account statistical information and logical arguments, but we must know what God says and obey it. We cannot base our arguments on man-made documents alone.

Praise the LORD! Sing to the LORD a new song, his praise in the assembly of the godly! Let Israel be glad in his Maker; let the children of Zion rejoice in their King! Let them praise his name with dancing, making melody to him with tambourine and lyre!

The point of the Psalm is, “praise God.” Why should we praise Him? Because he is the “maker” or creator both of the world and His people. We are to rejoice in our King with all sorts of activities, such as dancing and “making melody.”

For the LORD takes pleasure in his people; he adorns the humble with salvation. Let the godly exult in glory; let them sing for joy on their beds.

The King who we praise takes pleasure in us. When we are in submission to Him, acting according to His vision of lawfulness (Proverbs 29:18), God “adorns,” or clothes us with salvation. It would be easy to take verse 4 and use it to reflect on the salvation of our soul, but that is not the main point here. The salvation here is not from our sin, but from wicked political rulers, corrupt institutions, and tyrants.

As people with a Creator-King who saves us from our enemies in history, what else can we do but glorify Him in our songs of praise? Well, the next few verses tell us.

Let the high praises of God be in their throats and two-edged swords in their hands, to execute vengeance on the nations and punishments on the peoples, to bind their kings with chains and their nobles with fetters of iron, to execute on them the judgment written! This is honor for all his godly ones. Praise the LORD!

Praise in action, at least in one form, is the execution and/or binding of evil rulers. Christians not only have the right, but they are required, to defy tyrants who war against God’s Law. God is not indifferent towards those who stand against evil. Instead, He honors them!

The chief mode of praise in this Psalm is a joy-filled singing that accompanies armed-judgment against tyrants. Who is the agent of this armed-judgment from God? It is God’s people. Who are the kings and rulers that should be judged with chains and swords? Those who go against the Law of God, those who are not “ministers of good” (Rom. 13). Throughout Scripture, God’s concern is not gun-control, but government control.

What kind of guns can a Christian own? Whatever is necessary to defend one’s home and one’s land from tyrants. There is no biblical argument for a certain set of weapons that only the government may have. The only reason this is the case currently is because governments are trying to protect themselves from God’s judgment through His people.

Let’s look at recent news for an example of when Psalm 149 Christianity should have been exercised. Alfie Evans was determined to be “too great an expense” for the government-backed health-care system in Great Britain. They sentenced him to “palliative care” and removed his life-support. This was a death sentence.

In response, Alfie’s parents went to the higher authorities. But the courts said “no” to their request to leave him on life support. Later, they went back to the courts, and the courts said Alfie could not leave Britain to receive life-support in Italy (who’d made him a citizen). At last, Alfie’s parents asked if they could take their child home while he was dying. And again, the authorities said no. Police stood outside the hospital to protect the hospital staff while they made sure Alfie died.

This is where armed defiance would be honored by God. The parents and their Christian neighbor could’ve entered the hospital and taken the child, using armed force if needed. Would most Christians think this is okay? The answer should be pretty easy. You might even answer it by asking yourself. Ask most Christians today and they would say no. And that answer is why the State will continue to claim more authority over parents, the Church, and God. We will see more government death panels without Psalm 149 Christianity.

What should we do?

May it be said of us, as the Psalm declares, “Let the high praises of God be in our throats and weapons in our hands, to execute vengeance on the nations and punishments on the peoples, to bind our kings with chains and our nobles with fetters of iron, to execute on them the judgment written! This is honor for us, his godly ones. Praise the LORD!”