God’s characteristics reveal themselves in the Law, but we’ll get to that in a second. Nevertheless, God’s Law has been the center of controversy, abuse, and confusion.

To get the most out of our time in the Ten Commandments, let’s do a general overview of Law in Scripture. We’ll answer a few questions. What does the Law teach us about God? How can we categorize the law? Are those different ‘kinds’ of law unified? 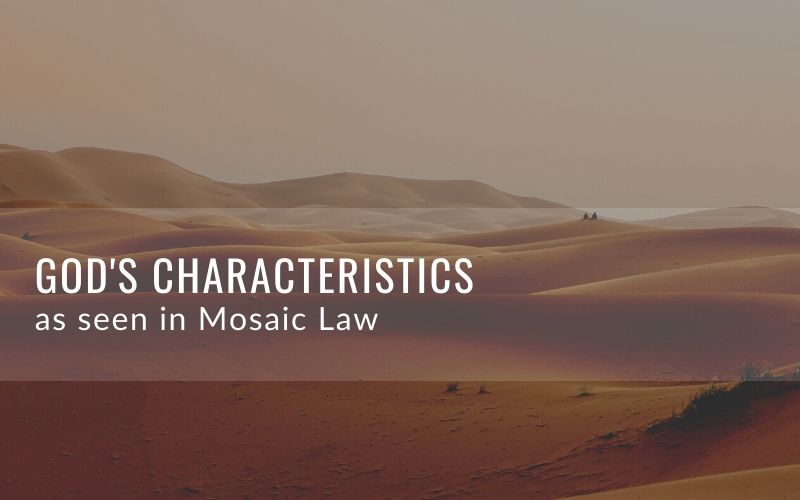 God’s characteristics and the Law

“All the paths of the LORD are steadfast love and faithfulness, for those who keep his covenant and his testimonies.” — Psalm 25:10

Don’t miss the word used in the verses above, “testimonies.” What this word tells us is that the Law witnesses to God’s character. It is God’s report card, so to say. It “testifies” to His character and conduct. Scripture is telling us, “Following God is following His Law. Following the Law is following God.”

How the Law reflects God’s character:

When we sin, we are telling lies about God’s character. If you think God’s Law is useless or wrong, then you believe God is useless or wrong. If you want to understand what justice, goodness, truth, faithfulness, and love is, then God and His Law are great places to start!

“What does God think of you?”

How we view the Law reveals how we view God. But an even more important question to consider is, what does God think of us? We can gain insight into this question by looking at:

“But now your kingdom shall not continue. The LORD has sought out a man after his own heart, and the LORD has commanded him to be prince over his people, because you have not kept what the LORD commanded you.” — 1 Samuel 13:14

Here is what is going on:

Do you try to love and follow God by obeying Him? Are you someone who wants to be close to God’s heart? Do you want a life in line with God’s characteristics? If so, the Ten Commandments are a great place to start!

Another critical verse on what God thinks of us is Matthew 5:19.

A famous theological formulation developed during the Reformation is the three-fold use of the Law. First, the Law convicts us of our guilt and drives us to Christ. Second, it teaches what obedience to God looks like in our life. Third, God’s Law restricts the sinners, usually through the punishment and consequences of sin by the different governmental spheres.

Our love of dividing by three expanded into other theological formulations as well. Reformed thinkers today divide the law into three categories: moral, civil, ceremonial. Sadly, this division goes too far.

Owen’s twofold division of the law

I find John Owen’s twofold division of the Law (moral and sacrificial) is not only in accord with Scripture, but more faithful to the Word as well. Owen’s view is found in Volume 5, Section 30 of the six-volume The Works of John Owen. He grouped the Ten Commandments, case laws, and the sanctions attached to the case laws under “moral law.” Owen categorized God’s Law as either moral or ceremonial. If you want a greater grasp of the clarity John Owen brings to the study of Law, I recommend George Joseph Gatis’ paper “John Owen’s View of Substantive Biblical Law.”

Ceremonial vs sacrifices of faith

While not agreeing with Rushdoony on all of his positions, I find myself in agreement with him when he writes,

Although so termed by excellent scholars, it is, I believe, a serious distortion of Scripture. The dictionary definition of “ceremonial” is “marked by, involved in, or belonging to ceremony: stressing careful attention to form and detail.” This is true enough, but it does not do more than describe the care which must be given to every aspect of these laws, but their meaning lies elsewhere. These are laws of sacrifice; their purpose is to restore a broken relationship to God, or, to give thanks, to seek atonement, or some like urgent aspect of our duty to God. The word ceremony trivializes atonement, and all sacrifices generally.

If we are to use the designation of “ceremonial law,” then we must make sure we do not define or explain their significance in terms of meticulous care, but in terms of what they signified. The God-centered context of those laws is the atonement. We find the seed of Christ’s reconciliation of the world to Himself in the “laws of sacrifice.”

The relationship between different “kinds” of laws and God’s characteristics

We talked about the proper “division” of the Law (twofold) and how we can classify them (moral law and laws of sacrifice). However, we do not take the supposition that scientific knowledge of a subject is gained by merely breaking it down into the smallest parts, but also understanding the unity of the whole. Or, how are the divisions of the law united in God whose character they represent?

Though the two families of the law are distinct, we cannot fail to see they are interrelated. The ceremonial laws are, as a matter of necessity, morally significant, since they demand obedience to the thrice-holy God; and the moral laws have an inescapable significance for the ceremonial laws (worship practices) since they set forth the manner of life that demonstrates the fear (worshipful respect) due to the Lord. In fact, all of the commands of the Law are so interrelated and interdependent that they form a living organism, one that serves to support the people of God in their call to remain faithful to the covenant. Upon the commandments of the Law hang the life or death of Israel. The laws concerning sacrifices and things “clean and unclean” have to do simultaneously with sin and forgiveness — each of these being moral categories. The moral laws dealing with persons and societies have to do with the sacrifices and divine worship that the members and people of the covenant owe to their Lord.

A couple of things we can learn here. First, all the laws are moral since they find their genesis in God. Second, the ceremonial laws define ethical-worship, and the moral law defines the ethical-life that worships. Third, they all support God’s people to remain covenantally loyal to Him. Fourth, both “kinds” of laws deal in moral categories of covenant-keeping and covenant-breaking. The “laws of sacrifice” deal with sin and forgiveness. The “moral laws” deal with sin and righteousness. Lastly, all biblical laws shape a society after God’s characteristics!

God’s Law reflects God’s characteristics. Whether we study a single commandment, a series of laws, or the topic in personal or academic research, we must approach it with reverence. We are not above it. We must be in submission to it as we are in submission to God. In summary, as we start looking into the Ten Commandments, we need to do so with humility.