Mark is, or at least is close to, my favorite Gospel. It is short, action-packed, optimistic, and permeated with the theme of the victorious Kingdom of God. We can see these things as soon as we read Mark 1:1! 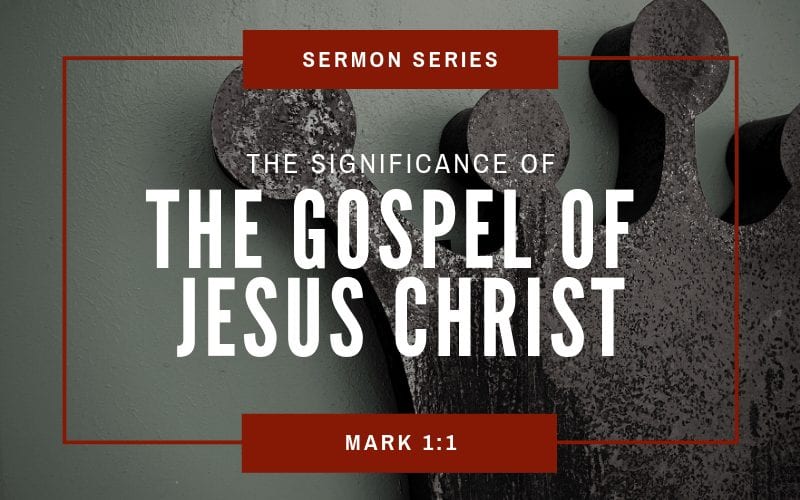 We might call this a loaded phrase. When it comes up in a text, listeners should be prepared for what comes next. We should be reminded of two things when we read these words:

1. When God created Heaven and Earth
2. When God took on human flesh, when Jesus came to earth as a man, when the second person of the Trinity took on human nature. We call this the incarnation.

The beginning of Mark is now teaching us a third thing to remember with the wording, “in the beginning” — the ministry of the adult Jesus on earth. The time when Jesus left His earthly father’s profession, and would now begin His teaching of repentance and the Kingdom of God.

What do all these events have in common? They completely changed the world. Reality, as it was before each of these “beginnings,” is drastically altered and better than it was previously.

When you see “in the beginning,” prepare for everything to be shaken.

Jesus and the Apostles were not the first ones to use the word Gospel. Pagan nations, like Greece and Rome, used it in reference to a victory, birth, or installment of a new emperor. “Gospel” was a political word.

“Gospel” was also religious in nature, even in its political usage. The emperor’s “gospel” included designations such as:
– “This is the man, the one who has been promised again and again.”
– “The turning point of the ages has come.”
– Stauffer summarizes the messianic message of Rome’s coins as, “Salvation is to be found in none other save Augustus, and there is no other name given to men in which they can be saved.” (Christ and the Caesars p. 88)

By the time the person of Jesus and His message come on the scene, this “Gospel of Jesus Christ” in context is both religious and political in nature. It encompasses both individual and society, both the one-and-the-many.

The Greek translation of the OT uses the same word for a promised King who would rescue Israel’s people from her enemies and bless the nations.

Christ was not the last name of Jesus. It would not have read “Christ” on the mailbox outside of his house, or as the last name on his magazine subscription. Christ was a position or an office that Jesus held – the “anointed” messianic servant. The one who would be bitten by the serpent, crushed for our iniquities, and who would defeat death by His resurrection.

The “Christ” is the Messiah, and Jesus is the “Christ.”

The Son of God was the OT title for the King of Israel. The royal significance of this title, “Son of God,” is clearly evident in Psalm 2:10-12.

“Now therefore, O kings, be wise; be warned, O rulers of the earth. Serve the LORD with fear, and rejoice with trembling. Kiss the Son, lest he be angry, and you perish in the way, for his wrath is quickly kindled. Blessed are all who take refuge in him.”

We see that the King-Son will be set over all other kings and that they must submit their rulership under His.

A quick gleaning from Psalm 89:3-4 is enlightening:

“You have said, “I have made my covenant with my chosen one; I have sworn to David my servant: ‘I will establish your offspring forever, and build your throne for all generations.’” Selah”

“I have found David, my servant; with my holy oil I have anointed him, so that my hand shall be established with him; my arm also shall strengthen him. The enemy shall not outwit him; the wicked shall not humble him. I will crush his foes before him and strike down those who hate him. My faithfulness and my steadfast love shall be with him, and in my name shall his horn be exalted. I will set his hand on the sea and his right hand on the rivers. He shall cry to me, ‘You are my Father, my God, and the Rock of my salvation.’ And I will make him the firstborn, the highest of the kings of the earth. My steadfast love I will keep for him forever, and my covenant will stand firm for him.”

Jesus is that Son of David, the Son of God (both in His Kingship and Deity), who will receive a victorious kingdom which will extend itself until it covers every tribe, tongue, and nation, and will bless every family of the earth as God promised to Abraham.

Basically, Mark is introducing us to the story of the victory of Jesus, the king of Israel. From the first verse, we should be ready to see Christ conquering, as the Westminster Shorter Catechism puts it, “his and our enemies.”

The Gospel of Mark is the antidote to defeatism, reductionistic thinking of the Kingdom of God, and the entirely inward focus of pietism.

1. Don’t view the future through the lens of unbelieving humanistic-man. In other words don’t believe that natural forces (climate, economic changes, etc.) determine the future.

2. Deny naturalistic determinism or the belief that man will do what they do because the chemical in their brains determined their decision.

3. Do not allow sovereignty to fall in the hands of man. No individual, office, or institution (i.e. central and city planners, city councils, kings, presidents, prime ministers, parliaments, legislatures, etc.) has control over the destiny of the nations.

4. Believe that Christ alone controls the future. He determines what will be the end of every nation – obedience to Him.

5. Trust in the victorious Messiah and His Kingdom. Know that success will and must be His, even in light of horrific news stories, tragic experiences, and any other occasion that might tempt you to deny the hope that is in you (1 Peter 3:15), a hope that is rooted in the fact that, “he who is in you is greater than he who is in the world.” (1 John 4:4)