And he preached, saying, “After me comes he who is mightier than I, the strap of whose sandals I am not worthy to stoop down and untie. I have baptized you with water, but he will baptize you with the Holy Spirit.” In those days Jesus came from Nazareth of Galilee and was baptized by John in the Jordan. And when he came up out of the water, immediately he saw the heavens being torn open and the Spirit descending on him like a dove. And a voice came from heaven, “You are my beloved Son; with you I am well pleased.” Mark 1:8-11 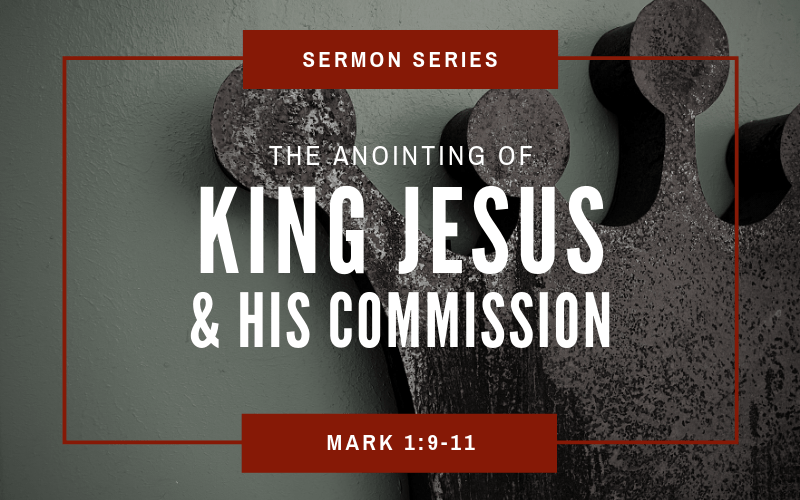 “After me comes he who is mightier than I”

Even though John was gathering a crowd, and they were coming outside to the wilderness to hear him and be baptized, it didn’t go to his head. No superiority complex developed. He didn’t forget that he was preparing for someone else, Jesus Christ. John viewed his prominence as a tool for service. John was ready to give up his leadership status as representative to the true King (Jesus).

One of the reasons why Jesus was “mightier” than John the Baptist was that Jesus brought a baptism using something much more potent than water. Jesus would baptize His people with the Holy Spirit. The baptism of the Messianic-King would bring about our adoption (Romans 8:15), enlistment into royal service (John 15:13-15), and help from God’s heavenly court (John 15:13-15).

John the Baptist did not get a “big head,” or become “full of himself.” The success of his ministry did cause him to get distracted from his purpose, to prepare the people for the one “who is mightier than I.” John viewed his prominence as a tool for service and was ready to give up his leadership status to the true King (Jesus).

The reason John gives for why Jesus is “mightier” than him is because, as the Messianic-King, He will “…baptized you with the Holy Spirit.” The messianic baptism will bring us adoption (Romans 8:15), royal service (John 15:13-15), help from God’s heavenly court (John 14:26). There are many others that could be listed.

During the time when John was faithfully executing his ministry (in those days) is when Jesus finally comes onto the scene in Mark’s Gospel. Jesus was coming from the Nazareth of Galilee, which was an area of ill repute.

The significance of Jesus coming from Galilee to meet these people coming for all over Israel to meet John the Baptist is easily lost on us. Let’s consider some information we have on Galilee.

The origin of Jesus ministry is another hint of God calling people out of the institutional religion of apostate Jerusalem. It also shows in seed form what will later be revealed in redemptive-revelation (Scripture) – the kingdom of Jesus is not antithetical to Gentiles. A diligent student of the Jewish Scriptures should have seen this fact as a “proof” of Jesus being the Messiah.

But there will be no gloom for her who was in anguish. In the former time he brought into contempt the land of Zebulun and the land of Naphtali, but in the latter time he has made glorious the way of the sea, the land beyond the Jordan, Galilee of the nations. – Isaiah 9:1

In the last post, we talked about a previous baptism in the Jordan River: Joshua and the Hebrew people crossing into Canaan.

Baptisms were not only used for cleansing ceremonies, but also for consecration to service for God. Jesus was anointed for the office as the King of God’s Kingdom. Although no one recognized Christ’s kingship at the moment, it did not dimish the reality that He was considered by God to be the anointed king of Israel. This is not the first time where a king was anointed without public recognition from those holding the high positions. Just like how Samuel anointed David as king before God’s people followed him, so John anointed Jesus as King before His people followed Him.

There is a theological fetish regarding the word ”Baptism.” Many obsess over the necessity of this word having to mainly do with “mode,” how one is physically baptized. And this usually comes with the need to prove the connotation of the word is immersion baptism. Besides Old Testament baptisms being by sprinkling, and the fact that God baptizes by pouring or sprinkling (Acts 2:3 – rest upon; Acts 10:44, 11:15-16 – falling upon; Luke 3:22 & John 1:32 – descending upon; Acts 2:17 & 10:45-46 – pour out upon; Acts 19:6 – coming from above), here are a few other reasons why Jesus being baptized by immersion is untenable:

When Jesus came out of the river to the banks of the Jordan, the Spirit came to rest on Him “like a dove.” During the time while waiting for the water level to go down after God flooded the world for the punishment of sin, a dove sent out by Noah brought an olive tree branch. During biblical times, an olive tree was a sign of peace. The fact that the Spirit came down like a dove on Jesus Christ was an indicator that He is the prince of peace (Isaiah 9:6).

Where else has the Spirit of God descended, and where did He rest? First, we have the Spirit descending on the Hebrew people in the wilderness. God was leading and protecting them in the wilderness until they arrived at their inheritance, Canaan. Second, we have the Spirit descending and hovering over the face of the waters at the beginning (Genesis 1) during the creation process. Jesus is both the New Creation and New Israel. Jesus is the New Creation in that He is restoring man to his ethical calling to build the Kingdom of God as representatives (Matthew 28:18-20; Romans 1:5; 16:26), and is the New Israel because He is restoring the covenant between God and His people.

Jesus is God’s “beloved Son” and God is “pleased” with Him. This Messiah-King is publically approved and commissioned by God Himself. We also see that the ministry of the incarnate Son of God is a Trinitarian activity. The ascending of the Son to faithfully carry out His mission, the Spirit descending and coronating the Son for His mission, and the Father proclaiming His pleasure in, and love for, the Son and His ministry. This beautiful event should strike fear in rules, kings, prime ministers, ministers, presidents, legislators, governors, and mayors who have not bowed to the knee of Jesus, the Messianic-King.

Why do the nations rage and the peoples plot in vain? The kings of the earth set themselves, and the rulers take counsel together, against the LORD and against his Anointed, saying, “Let us burst their bonds apart and cast away their cords from us.”

He who sits in the heavens laughs; the Lord holds them in derision. Then he will speak to them in his wrath, and terrify them in his fury, saying, “As for me, I have set my King on Zion, my holy hill.” I will tell of the decree: The LORD said to me, “You are my Son; today I have begotten you. Ask of me, and I will make the nations your heritage, and the ends of the earth your possession. You shall break them with a rod of iron and dash them in pieces like a potter’s vessel.”

Now therefore, O kings, be wise; be warned, O rulers of the earth. Serve the LORD with fear, and rejoice with trembling. Kiss the Son, lest he be angry, and you perish in the way, for his wrath is quickly kindled. Blessed are all who take refuge in him.

What does this tell us about Jesus?

If you have been a baptized, then you are also a royal representative of the Son. Your actions represent your King.

Do not fall into the error of Genealogical Fallacy (that origin determines right or wrong). Just because someone came from a certain background does not make them inherently evil, unethical, or unimportant in God’s Kingdom.

We must judge according to God’s standard, which is ethical in nature (John 7:24).

We must not think ourselves central to God’s plan in growing the Kingdom. We play a part, but we are only servant-sons and -daughters.