Commissioned by His Father, anointed by John the Baptist and the Holy Spirit, trained in the wilderness, decisively defeated Satan, began filling His ranks, and now we’re here. Jesus now moves from his victory over the commanding officer of the opposition forces (Satan) and takes the fight to one bastion of the Devil. The question is, where and what is that bastion? 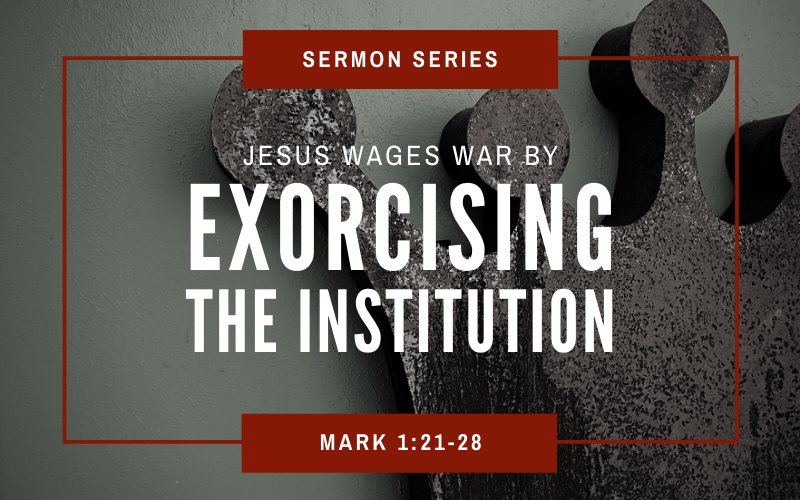 And they went into Capernaum, and immediately on the Sabbath he entered the synagogue and was teaching.

What was a synagogue?

The synagogue was first and foremost a place for reading of Scripture and for prayer … Intertestamental Judaism expected everyone to be thoroughly familiar with [God’s Law] as a basis for life. It was the synagogue, with its regular reading and interpretation of the Law and the Prophets, and with its schools for the young, that wove the Scriptures into the fabric of life and experience of the people. There were no altars nor sacrifices in the synagogue; instead only the sacred books (scrolls) were absolutely necessary.

These training centers were all over the land of Israel. They were not a centralized entity, but decentralized institutions, run by the decentralized Levites. A synagogue’s Levites would conduct, and train others in:

The primary role of the Levite was instruction in God’s Law-Word (Deuteronomy 33:10). Why should we not be surprised that Jesus went there? Jesus is the new-Israel entering into spiritual warfare against old-Israel. What better tactic is there than going for the educational ministry?

And they were astonished at his teaching, for he taught them as one who had authority, and not as the scribes.

This same thing was said when Jesus preached the famous Sermon on the Mount (Matthew 7:28, 29). Why was His teaching authoritative? What was the difference between His teaching and the scribes’? First, scribes could only repeat the words. Jesus was anointed and empowered by the Holy Spirit (Mark 1:9-11). Second, He was preaching God’s Law-Word, and not the traditions of man. Third, Jesus was correcting the false teaching of the Pharisees, the religious leaders (Matthew 5:21-6:18). Lastly, He was the very Word of God incarnate.

What have you to do with us, Jesus of Nazareth? Have you come to destroy us? I know who you are—the Holy One of God.

What did the demon recognize about Jesus? The demon knew that Jesus is the Son of God, the Son of Man, the Son of David, the Messianic-King who would crush the work of the devil and his minions.

What was the demon’s concern? Many people will confuse this demon as saying, “Have you come to destroy us demons?” This confusion stems from us later learning that thousands of demons can possess someone (Mark 5:1-20). However, the demon says, “I know who you are,” showing that this understanding doesn’t work.

The real fear was that Jesus would take the tool of the synagogue away. Jesus is a threat to the devil’s synagogue occupation. Jesus said the father of the apostate religious leaders and teachers was the devil (John 8:44). In Mark 1:39, we are told Jesus went into all the synagogues in Galilee to teach and cast out demons. When you put it all together, one of Jesus’ central ministries is exorcising the synagogues and restoring them. Is it any wonder that after the death and resurrection of Jesus Christ, the New Testament Church follows the synagogue model?

This narrative gives us another tie to David and Kingship (1 Samuel 16). David was anointed as the new king by Samuel because of Saul’s disobedience. Shortly after being anointed, David would play music to make an evil spirit leave Saul. Later, Jesus was anointed (baptized) as the new king by John, because of the failure of Israel. Shortly after being anointed, Jesus’ voice would make the evil spirits leave the synagogues, which were the educational centers for Israel (the place of training in royal wisdom).

“But Jesus rebuked him, saying, ‘Be silent, and come out of him!’ And the unclean spirit, convulsing him and crying out with a loud voice, came out of him.”

By the mere power of Jesus’ Word, the demon was cast out. The command of Jesus is the command of God. The crying, or “shrieking,” of the demon accomplished nothing, but the voice of Jesus defeats His enemy (Psalm 29:5-6).

Why did Jesus mute the demon? Eventually, the clash between Jews and Jesus will escalate to death threats, unjust courts, and murder. In the future, the church gets charged as being an aggressive liberation movement (Acts 5:36-37), a terrorist group (Acts 21:38), and committing seditious activities (Acts 17:7). Jesus carried out training and preparation for ministry through His time in the wilderness. Now, the disciples need training for what is ahead of them.

The silence hints towards Jesus’ Davidic-kingship. David kept the secret that he was anointed as king when he went to slay Goliath. So too, Jesus was also silent in the early stages of defeating death and the devil. The Bible connects Jesus, David, and the Kingdom (1 Samuel 16) over and over again.

And they were all amazed, so that they questioned among themselves, saying, “What is this? A new teaching with authority! He commands even the unclean spirits, and they obey him.”

The people likely saw what the demon saw but not as clearly. Jesus was a new kind of man. Little did the people know, unlike the demon, He is the new Adam. Something negative about this whole scenario shouldn’t slip by us. The people were not surprised that a demon was in the synagogue, but by the fact that Jesus has authority over the demon. The land of Israel, where God’s presence was to dwell with His faithful people, but will now deny Jesus (God incarnate), unfaithfully disregard His Word, and have demons in the religious and civic high places of Israel.

And at once his fame spread everywhere throughout all the surrounding region of Galilee.

Even though the demon got slapped with a gag-order, Jesus’ authoritative teaching and the power of God through His work spread Jesus’ fame throughout Galilee. We will see that, even with Jesus commanding specific individuals not to spread His messianic-role, His reputation grows to the point where His ministry earns the threatening attention of the Pharisees. Another illusion to Samuel 16?

What does this tell us about Jesus?

His promises are no joke

Our armor against the demons

Finally, my brothers, be strong in the Lord and in the power of His might. Put on the whole armor of God that you may be able to stand against the schemes of the devil. For our fight is not against flesh and blood, but against principalities, against powers, against the rulers of the darkness of this world, and against spiritual forces of evil in the heavenly places. Therefore take up the whole armor of God that you may be able to resist in the evil day, and having done all, to stand. Stand therefore, having your waist girded with truth, having put on the breastplate of righteousness, having your feet fitted with the readiness of the gospel of peace, and above all, taking the shield of faith, with which you will be able to extinguish all the fiery arrows of the evil one. Take the helmet of salvation and the sword of the Spirit, which is the word of God.”- Ephesians 6:10-17