The Gospel of Mark keeps gaining momentum as the narrative unfolds. Jesus first defeated Satan, called people into His ranks, and then began his offensive against the demonic forces in the highplaces (the demon in the synagogue). As the conquering and serving King picks up steam, what new difficulties will arise? We know the demons respond with fear, but how will the people Jesus has come to set free respond? 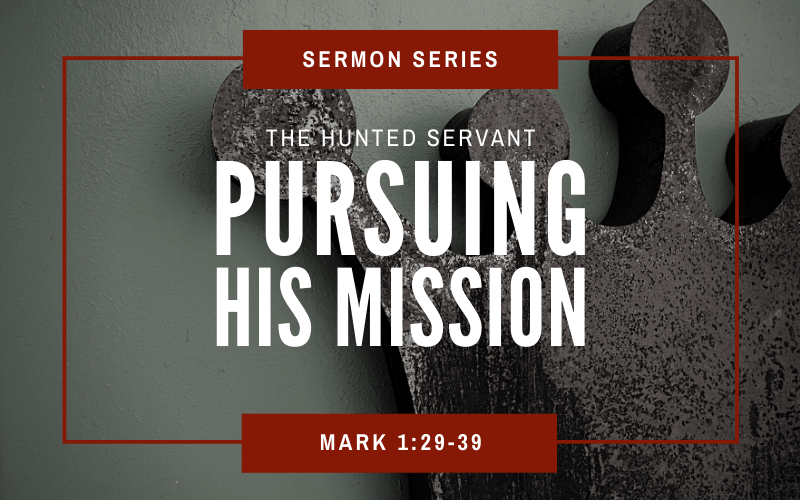 And immediately he left the synagogue and entered the house of Simon and Andrew, with James and John. Now Simon’s mother-in-law lay ill with a fever, and immediately they told him about her. And he came and took her by the hand and lifted her up, and the fever left her, and she began to serve them.

After dealing with the demonic forces and traditions of men in the synagogue, Jesus heads to His disciples’ home. This likely was a destination both for rest and for training the disciples further in what they observed. Although not mentioned in the previous confrontations at the religious training centers of Israel, it is logical to assume the disciples were watching as a part of their training.

Besides training, the destination was most likely a place to rest. Something that, as we will see, is a commodity for servant-king Jesus.

Now Simon’s mother-in-law lay ill with a fever, and immediately they told him about her. And he came and took her by the hand…

While in Simon and Andrew’s house, Jesus was informed of their mother-in-law lying ill in the house. Don’t miss this. Jesus was not brought to her. He went to her Himself. Despite a day of advancing the Kingdom in the public square, His conquest of sin and death do not stop in a place of rest.

…and lifted her up, and the fever left her, and she began to serve them.

Jesus not only healed her of her sickness, but fully renewed her strength. And she, out of gratitude, began to serve all of them. She was raised and began to serve. We have a fine paradigm to understand our resurrection in Christ.

That evening at sundown they brought to him all who were sick or oppressed by demons. And the whole city was gathered together at the door.

He has been teaching in the synagogue, confronting demons, healing others, and still, the request for his time and service continue to grow. The whole city is at his doorstep.

And he healed many who were sick with various diseases, and cast out many demons. And he would not permit the demons to speak, because they knew him.

What did Jesus do? Did he shut the door and close the curtains? Tell them to come back later? No. He began to heal the sick and caste out demons. He revealed his divine authority, not through proclamation, but through service:

But if it is by the finger of God that I cast out demons, then the kingdom of God has come upon you. – Luke 11:20

But if it is by the Spirit of God that I cast out demons, then the kingdom of God has come upon you. – Matthew 12:28

The Sound of Silence

Note too, that he did not permit the demons to speak. We covered the reasons why He silences the demons in a previous post. I want to point out something else at this point. In Mark 1:25, Jesus tells the demon to “be silent.” The Greek word literally means “be strangled.” Every time Christ strangles a demon, He is flexing His divine authority.

Not only does he silence the speech of demons, but also puts to rest their work. Simon’s mother was ill, but it was demonically induced (Luke 4:38-39). Jesus obliterates the works of the devil.

And rising very early in the morning, while it was still dark, he departed and went out to a desolate place, and there he prayed.

Jesus, in seeking to pray to His Father, most likely for strength, goes to a place outside of the city. There was such a high demand on Jesus’ time that the city was a no-go for prayer. When a quality service comes at such a low price (free in this case), the demand increases.

What we have here is the economic law There Ain’t No Such Thing As A Free Lunch (TANSTAAFL). Jesus’ free service to others had a great cost for Himself.

And Simon and those who were with him searched for him, and they found him and said to him, “Everyone is looking for you.”

He goes off to a private place outside of town to pray to His Father. A trail was left, because Simon hunted down his Master. The Greek word used for “looking” was used most commonly for a hostile pursuit in the Septuagint. It was used for Saul’s tracking of David.

Greek readers at that time would have picked up the sinister tone in Simon’s words, “Everyone is hunting for you.” People who liked Jesus coveted his time and miracles. Their attention brought about the ire of His enemies (demons and religious leaders). He did not have time to pray. He had become the valuable animal everyone wanted a piece of. Like the prophet said,

He was oppressed, and he was afflicted, yet he opened not his mouth; like a lamb that is led to the slaughter… – Isaiah 53:7

And he said to them, “Let us go on to the next towns, that I may preach there also, for that is why I came out.”

Hunted and tired, Jesus continues the victory march against the New Egypt, Jerusalem. It would have been easy to give up, get frustrated, and just stay where he was already having success. However, Christ prioritized the mission His Father had given Him.

And he went throughout all Galilee, preaching in their synagogues and casting out demons.

If you are a servant as our King is, then there will demands on your time. Genuine service out of gratitude to God is highly valuable. Friends, acquaintances, and strangers will demand it. This is not a bad spot to be in Requests for your time and services are an indicator of servanthood.

Jesus had a mission given to Him by His Father. He did not lose sight of the race set before Him. Like Jesus, we need to have our faces set like flint (Isaiah 50:7) with the mission we have been given (Matthew 28:18). A part of this would be finding your calling. Gary North has a helpful lecture on the subject.