Out of Egypt | Four Motivations for Obeying God

Before God gives the Ten Commandments, He introduces Himself and what His relationship is to His people. Many people call it the preamble (introduction) to God’s Law.

And God spoke all these words, saying, “I am the Lord your God, who brought you out of the land of Egypt, out of the house of slavery.” – Exodus 20:1-2

From this introduction to God’s Ten Words (commandments), we can see four reasons to follow God’s commandments. The Lawgiver is our Creator, Yahweh, Covenant Friend, and Redeemer. All of these realities come to to a head when God called Israel out of Egypt. This fourfold aspect of God’s relation to us in revealing the Law is from Rev. Morecraft’s excellent exposition of the Westminster Confession of Faith called Authentic Christianity. 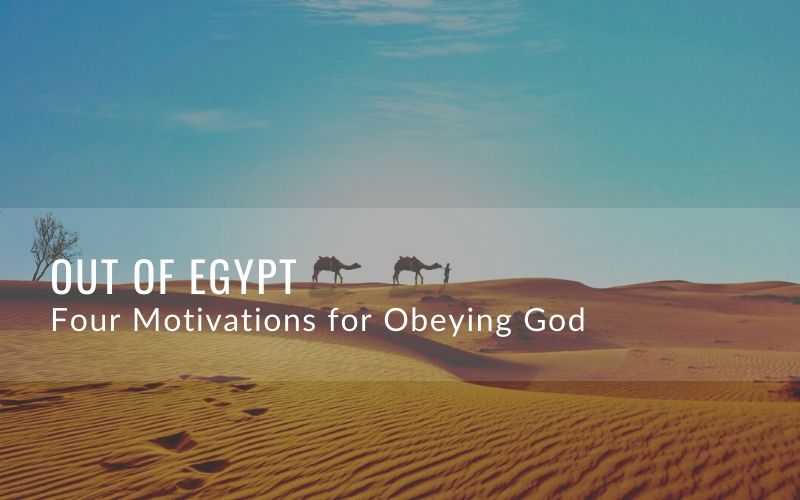 The Beginning: The Lawgiver is our Creator

The heavens declare the glory of God, and the sky above proclaims his handiwork. Day to day pours out speech, and night to night reveals knowledge. There is no speech, nor are there words, whose voice is not heard.

Their voice goes out through all the earth, and their words to the end of the world. In them he has set a tent for the sun, which comes out like a bridegroom leaving his chamber, and, like a strong man, runs its course with joy.

Its rising is from the end of the heavens, and its circuit to the end of them, and there is nothing hidden from its heat. – Psalm 19:1-6

Third, since the Lawgiver is our Creator, He is also Jesus Christ.

He is the image of the invisible God, the firstborn of all creation. For by him all things were created, in heaven and on earth, visible and invisible, whether thrones or dominions or rulers or authorities—all things were created through him and for him. And he is before all things, and in him all things hold together. And he is the head of the body, the church. He is the beginning, the firstborn from the dead, that in everything he might be preeminent. – Colossians 1:15-18

Main point: God created everything and still controls and guides His creation. Since God’s Law is a reflection of God’s character, and God made this world according to His desire, then “everything can be understood correctly and used properly and safely only in terms of that Law-Word.” (Authentic Christianity (Vol. 5), Joseph Morecraft, pp 2141)

Lord: The Lawgiver is Yahweh

The Hebrew word translated as “LORD” in the preamble we are studying is the unique name of God. Many understand it as “I Am that I Am.” Little confused? Let’s use me, Matthew Belleville, as an example to clarify. I am Matthew Belleville because my mother gave birth to me; my mother named me; all the difficulties I have had; the teachers I have had; God saved me; being married to Helen; I have two daughters, etc. Other people shaped the person I am today, the experiences I have had, and many more things I can list.

God is unchanging (or a better formulation might be divinely-consistent):

Of old you laid the foundation of the earth, and the heavens are the work of your hands.

They will perish, but you will remain; they will all wear out like a garment. You will change them like a robe, and they will pass away, but you are the same, and your years have no end.

The children of your servants shall dwell secure; their offspring shall be established before you. – Psalm 102:25-28

Jesus Christ is the same yesterday and today and forever. – Hebrews 13:8

God is unchanging and doesn’t need us, but He chose to create us and enter into a relationship with us. He is indeed gracious to us. However, if God’s authority is transcendent (Yahweh) and imminent (Creator), then, “Neither Jehovah nor His Christ can be accepted if their sovereignty, their Law, and their Word are denied.” (ibid., Joseph Morecraft, pp 2142)

Main point: God is sovereign, divinely-consistent, and self-contained as the Trinity from eternity past to the eschatological future. That being the case, our relationship is determined by God’s terms. The Law, and Jesus Christ as the Law incarnate, reveal God’s terms. When describing God, beginning with, “I feel that God is like…” is a dangerous step to divinizing yourself.

Your God: The Lawgiver is our covenant Friend

In the preamble, it says, “I am the Lord your God.” An amazing declaration! The God who made us, but doesn’t need us, is our God. He entered into a relationship and made promises to us (covenant). Because God is consistent, He will keep His promises to us.

When Jesus saved us, we enter into God’s covenant. As long as God is God, which is always, He is our God. First, He has made Himself inseparable from us.

For the promise is for you and for your children and for all who are far off, everyone whom the Lord our God calls to himself. – Acts 2:39

Second, God is our God, our Heavenly Father. Jesus is our savior-brother. The Holy Spirit is our advocate/helper.

For you did not receive the spirit of slavery to fall back into fear, but you have received the Spirit of adoption as sons, by whom we cry, “Abba! Father!” – Romans 8:15

My little children, I am writing these things to you so that you may not sin. But if anyone does sin, we have an advocate with the Father, Jesus Christ the righteous.” – 1 John 2:1

But the Helper, the Holy Spirit, whom the Father will send in my name, he will teach you all things and bring to your remembrance all that I have said to you. – John 14:26

Main point: We, quite literally, have a moral claim on God and His promises. We are legally bound to Him as sons and daughters, servants, and priests. He has an even greater one on us since His grace and authority created those relationships. All men are in covenant with Yahweh. The difference in the relationship for Christians is that He is our covenant Friend.

Out of Egypt: The Lawgiver is our Redeemer

The last thing God says before giving His Ten Commandments is “I…brought you out of the land of Egypt, out of the house of slavery.” God always gives grace before He gives Law. God saved Israel from slavery, and now they have new rules to live by while becoming mature. Christians are saved from slavery to sin (out of Egypt), and now we have new rules to live by while we mature.

The Ten Commandments do not save us, and they do not make us a Christian. Only trusting in Jesus Christ can save us.

Therefore do not be ashamed of the testimony about our Lord, nor of me his prisoner, but share in suffering for the gospel by the power of God, who saved us and called us to a holy calling, not because of our works but because of his own purpose and grace, which he gave us in Christ Jesus before the ages began, and which now has been manifested through the appearing of our Savior Christ Jesus, who abolished death and brought life and immortality to light through the gospel… – 2 Timothy 1:8-10

Because, if you confess with your mouth that Jesus is Lord and believe in your heart that God raised him from the dead, you will be saved. For with the heart one believes and is justified, and with the mouth one confesses and is saved. – Romans 10:9-10

Redemption/Salvation always comes before Law in the experience of God’s people.

God’s grace always gives what God’s Law asks from us.

Now we know that whatever the law says it speaks to those who are under the law, so that every mouth may be stopped, and the whole world may be held accountable to God. For by works of the law no human being will be justified in his sight, since through the law comes knowledge of sin.

For I am not ashamed of the gospel, for it is the power of God for salvation to everyone who believes, to the Jew first and also to the Greek. For in it the righteousness of God is revealed from faith for faith, as it is written, “The righteous shall live by faith. – Romans 1:16-17

Second, Law demands and directs. Grace gives strength and love to obey those commands and to follow those directions, and grace forgives when Biblical Law is transgressed.

But by the grace of God I am what I am, and his grace toward me was not in vain. On the contrary, I worked harder than any of them, though it was not I, but the grace of God that is with me. – 1 Corinthians 15:10

Third, our gratitude for redemption in Christ motivates us to more consistent obedience to God’s Law.

For God has done what the law, weakened by the flesh, could not do. By sending his own Son in the likeness of sinful flesh and for sin, he condemned sin in the flesh, in order that the righteous requirement of the law might be fulfilled in us, who walk not according to the flesh but according to the Spirit. – Romans 8:3-4

Main point: All who have the Lord as their faithful Friend, by grace, are to obey His Law as loyal friends.

Get motivated, get mature

As we can see, all four motivations are because of gracious and voluntary acts by God. He is Yahweh, our Creator, Redeemer, and Friend. With those motivations in place, we should approach the life of obedience with joyful hearts.

Next, we will jump into the first of the Ten Words given by God. They are an invitation to maturity.