In our survey through the Psalms, we’ve looked at the first and second, and now we’ve arrived at the third one. Psalm 1 showed us the character of “the blessed man” – he is obedient. Then Psalm 2 revealed God’s response to rebellious leaders – the enthronement of His Son.

Psalm 3’s scope is much more focused. We received the principle we are to follow (Psalm 1) and the part we play in the big picture (Psalm 2). Now we have a close up of how our “faith under fire” should look (Psalm 3). 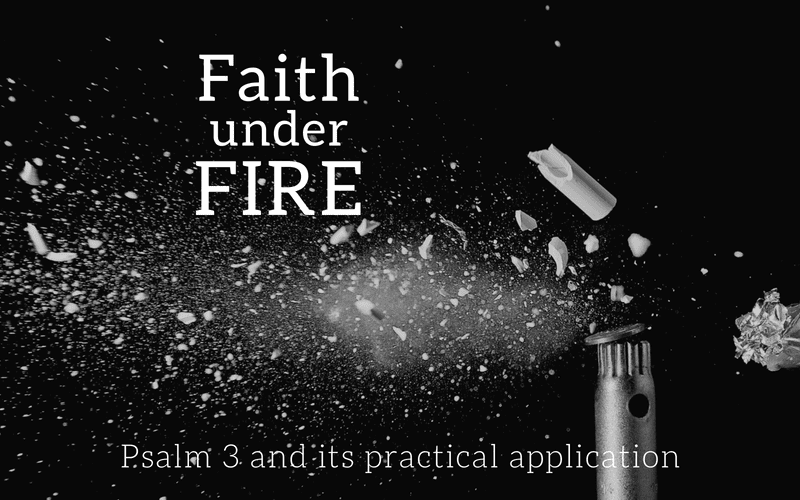 “O Lord, how many are my foes!
Many are rising against me;
many are saying of my soul,
‘There is no salvation for him in God.’ Selah”

The deck was stacked. Lined up all around David were his enemies. John Gill says that the wording not only means that the number of those in opposition was significant, but that they were also great in quality.

Rather than mentioning physical assault, David cries out because of their words: “many are saying of my soul, ‘There is no salvation for him in God.'” From 2 Samuel 16:5-8, we find that this slanderous attack comes from the mouth of Shimei, who is a supporter of Absalom’s rebellion against David.

There are two things to note here. First, because David was God’s anointed king, his enemies were also God’s enemies. And we see in this Psalm that even a verbal attack against God or His people is considered warfare against Him. As seen in the Old Testament, false witnesses were to be severely, and justly, punished for their attack on the nation and its legal system. Unfounded accusations are a go-to tool for Satan and his minions. Even today, many court cases against Christians and churches are merely loud and incessant libel, but the saddest part is our current judicial system accepts a significant portion of it.

Second, any enemy that raises its fist against God, either directly or against those who represent Him, is claiming deity. They are making judgments against the judgments of God. God judged that David and his faithful line would be blessed with dominion, whereas his enemies want to rob David of his anointed authority and make God a liar by passing dominion to David’s unfaithful line, Absalom. The prophecies or judgments Shimei gave were that God would have no salvation, deliverance, or victory for His follower. However, God is the “Lord mighty in battle” (Psalm 24:8).

“What consolation is our Lord for us in conflict? How does God respond in the midst of our battles? What is He to us?” David’s response to these questions is stunning.

“But you, O Lord, are a shield about me,
my glory, and the lifter of my head.
I cried aloud to the Lord,
and he answered me from his holy hill. Selah

I lay down and slept;
I woke again, for the Lord sustained me.
I will not be afraid of many thousands of people
who have set themselves against me all around.”

God is our shield, our fortress against all the enemy’s fiery darts. He lifts our head, meaning He doesn’t let us get crippled by morbid introspective-depression. The Lord answers our cries. Our God is our sustainer, to the point that even if we are under fire from our enemies, we can sleep with confidence. Even if multitudes align themselves against the Lord’s people, there is no reason to fear, for our God is the “Lord of hosts” (Psalm 46:11).

Psalm 3 teaches us that God is our defender even against false accusations. Accusation, falsified charges, and libel are dangerous. They can destroy families, businesses, communities, and nations. The Proverb is very true when it says, “Death and life are in the power of the tongue…” (Proverbs 18:21) But keep in mind that God is our fortress against fiery darts of our enemies’ tongues. One means of protection is the ethical code He has given us in His Law, which provides the public witness of our uprightness.

When the seed of Satan and the seed of the woman clash, there is defeat and victory, loss and gain, grievous wounds and memorial battle scars.

“Arise, O Lord!
Save me, O my God!
For you strike all my enemies on the cheek;
you break the teeth of the wicked.

Salvation belongs to the Lord;
your blessing be on your people! Selah“

David asks for God’s help (v. 7a) against the tongues of his enemies. And surprise, surprise, he asks with faith that God will answer by silencing his enemies (7b). God did silence his enemies (in this case, Absalom and his supporters) by the death of Absalom at the hand of Joab (2 Samuel 18:14-18). Salvation, deliverance, or victory all come from God and at the cost of His enemies’ defeat. This victory over defeated foes is our promise to walk according to the virtue of our covenanted Lord.

[ctt template=”2″ link=”kMwGb” via=”yes” ]Salvation, deliverance, or victory all come from God and at the cost of His enemies’ defeat.[/ctt]

1. Know that slander against your character, if you walk by God’s standards, is no mere trifle. It is an attack on God since His people operate as His representatives.

2. Prayer and Psalm singing is an excellent battle tactic against those who wish to discredit you and the Lord. It reminds us of our reliance on God for victory in our responses to slander.

3. Jesus is our advocate in Heaven. His righteousness is the fee for the legal defense of God. When those outside of Christ who practice wickedness bring charges against us who are in Christ and obedient to His statutes, the court of heaven has already ruled in our favor. We do not need to become bitter in our counter arguments/measures against foes and slanderers since the perfect Judge in Heaven has already declared us innocent.

4. Our conduct according to God’s Law is our witness before men (James 2:14-26). We do not need to be personally offended against false charges. Instead, we can carefully weigh ourselves against the standard God has given and judge whether the allegation is true or not. If it is not true, then we have our divine defense in court (whether church or civil). Although the court may judge in wickedness, we have hope in public witness and the witness of Heaven to right the wrongs in a crooked justice system.

5. If the charge from God-haters is true, and we have committed an actual offense against God’s Law, then we are able to humble ourselves. We willingly submit to the consequences that are in line with just weights and measures and repent of our sins.