“Therefore, having put away falsehood, ‘Let each one of you speak truth with his neighbor,’ for we are members of one another.”

As new people in Christ, there is a new, ethical quality to our life. In fact, this is the main focus of the “putting off” and “putting on” — our head, heart, and hands must match the prerogatives of Christ presented in Scripture. Consequently, being baptized into Truth (Christ) we must abhor lies.

It seems straightforward, but mastery begins in asking questions and finding answers. What lies? Where do they come from? What do they deny? How does truth prevail? 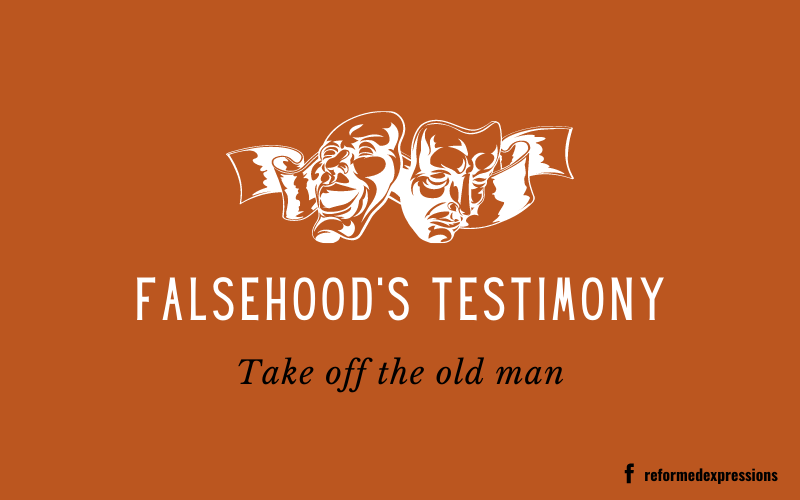 Falsehood testifies to our old household. Before our adoption as “sons of God” (Romans 8:23), we were Satan’s sons (Ephesians 2:1-3).

“You are of your father the devil, and it is the desires of your father that you want to do. He…has not stood in the truth, because there is no truth in him…he is a liar and the father of lying.”

When we lie, we testify falsely to our covenantal status. We tell the courts of the world and heaven that we are not new creations in Christ and that we don’t have the Law written on hearts of flesh, there are no blessings found in obedience, God isn’t our Father, Christ isn’t our brother, and we are not temples of the Holy Spirit. Furthermore, we testify that Satan is our father, and the works of the devil are our fruit — declaring the nullification of God’s adoption.

Falsehood is a violation of the 9th Commandment — the slandering of our Father in Heaven.

Teach me your way, O Lord,

that I may walk in your truth;

unite my heart to fear your name.

The “ways of the Lord” are none other than God’s revelation in Scripture. The core ingredients are who God is, who we are concerning God and others, how the world works, and our responsibilities in light of the preceding things. Similarly, the fear of God, which is the beginning of wisdom, unites us to our God and translates His Word into our obedience.

When we wear the ethics of the “old man,” we screw up in all those areas. Union with God in daily living is impossible with falsehood.

Transgression speaks to the wicked

deep in his heart;

there is no fear of God

For he flatters himself in his own eyes

that his iniquity cannot be found out and hated.

First, when we transgress the Law, written on our hearts, we deny the very core of our being. Second, we reject God’s testimony of our adoption pictured by baptism. If falsehood goes so far as to deny the divine engraving on our hearts and our Father, is it any wonder we don’t know ourselves?

Self-delusion is the process of hearing God’s Word and doing otherwise. Besetting sin is the ingrained practice of lying to God, yourself, and others. Consequently, besetting sin occurs when we don’t fess up to our transgressions as the fundamental lie of who we are in covenant with God.

The lies we tell

False-man (Christians who wear the “old man”) take the current climate, enemies, and shortages as the de facto theme for history. The meek will not inherit the earth. Jesus won’t progressively defeat his enemies. Our daily obedience doesn’t preserve nations and cultures. False-man lives in a world of loss and lack. True-man sees a world of opportunity and answers shortages with productivity.

False-man seeks out excuses over ownership. Consider the religious-political leadership of the Sanhedrin. “It’s too dangerous for the general good, what with this Jesus Christ is stirring up trouble. Even Caiphas’ prophecy agrees with His death.”

Instead of finding the socio-political problems in their unlawful and blatantly ungodly rulership, they jumped at the gun to manipulate a prophecy to solidify their grasp on the reigns. On the other hand, careful consideration of Jesus Christ, what He did and taught, and the old prophets in light of Caiphas’ prophecy, they would have seen the promised Suffering-King. Instead, they dimmed the light on Scripture and put the glory (weight) on their priorities and problems.

False-man fixates on their issues, desires, authority, and what do you know, Scripture justifies their questionable actions. “It’s okay to lie here.:” “It’s okay to withhold beneficial information that won’t help my standing.”

Come now, you who say, “Today and tomorrow let us travel to that certain city, spend a year there, do business and make a profit;” whereas you don’t know anything about the morrow. For what is our life? It is even a vapor that appears for a little time but then vanishes away.

For the sons of God, who are to put in the ethics of the “new man,” we understand that our success depends on the godly exercise of responsibilities and the Lord’s sovereign blessing. Prideful “new men,” unwilling to take off the old man’s ethics, lives in these “open” plans.

He assumes that his plans will be victorious. “I’ll go, prosper, and conquer.” If only things go his way, he has success. First, this mindset takes credit and denies failure. “Well, if the roads weren’t close, prices didn’t go up, etc., then it would have been fine.” Second, the false-man excuses failed promises. “I was supposed to go and make that business deal with you, but do to things out of my control, I can’t,” allowing for any inconvenience. It excuses failure to keep one’s word.

Third, false-man uses proud plans, with convenient loopholes, to mooch off neighbors. “I’ll get a job soon, so help me for a little longer.” “I said I should have been able to pay you back by now. It wasn’t a sure thing.” Fourth, the most insidious practice of those who should be “new man” is to take the truth and abuse it. “Clearly it wasn’t in God’s plans for me to make it.” To declare “if the Lord wills” to escape being kept at one’s word is a violation of the Third Commandment, useless uttering of God’s name.

In contrast, the “new man,” disrobed of falsehood, looks to the future and makes plans and promises with God’s sovereignty in mind. Success is God’s gift in response to his efforts. Oaths will be fulfilled unless God’s providence absolutely hinders it, and the other party will be offered restitution and/or askance of forgiveness.

Words of convenience echo the falsehood which the Father of Lies seductively spoke in the Garden. “New man” clothed in truth speaks plainly and loyally to neighbor, testifying to God and man the potency of covenanting with God.

To put off falsehood is more than avoiding blatant lies. It is a life of refusing escapism and irresponsibility. Deny the use of convenient speech for getting out of helping, serving, or doing something you don’t like for the benefit of others. Put on truth, as you put on Christ. Keep your oaths sure and straightforward, and the only condition is God’s absolute denial of execution. Give charitably of your time and capital with resolute sureness, and if you can’t, don’t make yourself look good with slippery talk.

Put on Christ and speak with truth in a world of sin and deceit, and it will be no surprise who gains supremacy — “new man” clothed in truth. In a world under Christ’s authority, lies have no safe place to hide.