Terminal churches are plentiful. While demonstrating the broad reach of Christianity, these churches are also evidence of the emptiness of Christianity’s impact on the world. The expansive but useless churches of today should lead us to the all-important question, “Why?” 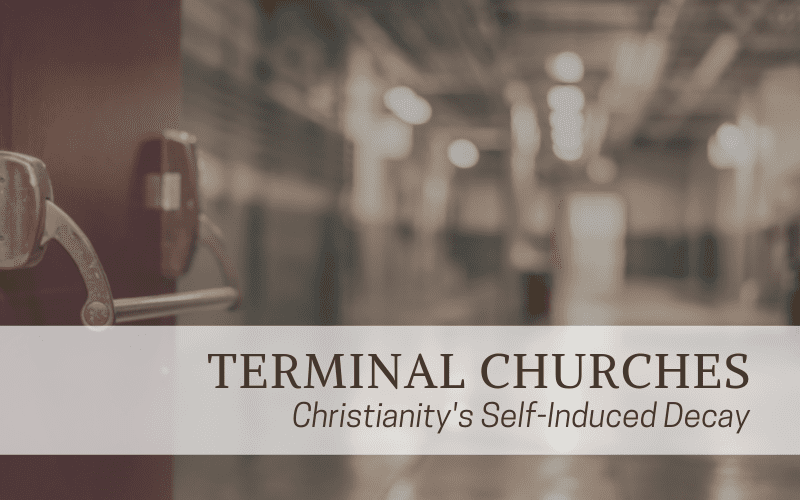 What is a terminal church?

First, the church sees itself as the end-all-be-all, if not explicitly, then implicitly. It calls all ministries to be within their walls, under their “care,” and not to be pursued until the church leaders have given their stamp of approval. The church has absorbed more and more pre-eminence in regards to becoming the dispenser of evangelism, discipleship, outreach, etc. Let’s look at a few examples.

Praising institutional works rather than the ministry of the saints

Those who serve “in the church” receive the accolades and public recognition in local churches. Additionally, those who did extra-ministries on church premises, or off the premises but under the banner of the local gathering, are the center of public recognition. You will not hear, at least anywhere near as often, about the man who started a business and is employing and discipling poor migrant workers. Or about the consultant who trains businesses to communicate better and create efficient systems that benefit those inside and outside the company. Ronald Kirk points this out in his excellent book, Thy Will Be Done.

Hoarding the discipleship of children

Furthermore, the terminal church harms the education of children through the excessive and sole promotion of children’s ministries. They “teach” Christian children in Sunday school but do nothing to train the parents to raise their children in righteousness. As a result, children are given a somewhat-Christian education once a week. While government-sponsored “theology” is forced on them five days a week. Instead of training parents to disciple their children in the home seven days a week, the terminal-church teaches an “adult sermon,” ships the kids off to a sermon that lacks little to no training in self-government under God, and then the people go home.

The main tactic through all of these examples is to multiply “ministries” that the local church offers. Youth, young adult, young married, “senior saints,” potential leaders, singles, and a whole host of other groups have various events, studies, etc., that are all coopted under the banner of the local church. From this point on, it is easy to bring the complete religious life of individual Christians into the institution.

Here is an example of the local church’s guide to guilt manipulation to absorb the individual’s “Christian life”:

First, bring up church-sponsored groups and events as ways to grow and be obedient to the command to love each other. Don’t forget to mention that these sorts of ministries are the requirement of “faithful church members” who have a “true servant heart.”

Second, lament the fact that so many in the Church have lost a sense of hope and community. Then, present these ministries as a solution.

Fourth, use every announcement opportunity afforded by the liturgy or service to bring up the benefits of these functions as well as the chance to love one another … again. And again and again.

Fifth, bemoan the lack of love for the saints and emphasize today’s “cold-hearted Christianity” by hinting at the open spaces still left on the signup sheets.

Finally, after the group/event/study finishes, profusely thank the leaders and participants with applause and lay on them the title of a “sacrificial servant for the Kingdom of God.”

the equipping of the saints for ministry throughout their whole life, outside the local assembly, for the growth of the Kingdom of God.

The authoritative Church will be restored as a teacher of righteousness, even to the rulers of nations, once the institutional church returns to its limited and God-ordained function.

Was the institutional church meant to be terminal?

Was the Church to be subsumed into the institutional church? Nope. The people of God are not a centralized bureaucracy. Most Laws in the Bible were not punishable by the civil government. Only a few visits to Jerusalem were required a year. The Levites who took care of social services (health, education, etc.) were available throughout the land of Israel. What we see is that the Church was chiefly decentralized.

The Bride of Christ must not be imprisoned in or enslaved to the institutional church. Rushdoony writes,

The training of such mature men is the function of the church. The purpose of the church should not be to bring men into subjection to the church, but rather to train them into a royal priesthood capable of bringing the world into subjection to Christ the King. The church is the recruiting station, the training field, and the armory for Christ’s army of royal priests.
It is a functional, not a terminal, institution.
The church has by and large paid lip service to the priesthood of all believers, because its hierarchy has distrusted the implications of the doctrine, and because it has seen the church as an end in itself, not as an instrument.
Rushdoony, RJ, “Institutes of Biblical Law” Volume 1, pp. 850.

What is the local church, as an institution, supposed to look like? What is its ministry? And finally, what is the duty of its leaders and the saints under them?

The cure for the terminal church

The institutional church cannot be terminal. The ministry of the Church is not to be limited to the walls of churches.

And he gave the apostles, the prophets, the evangelists, the shepherds and teachers, to equip the saints for the work of ministry, for building up the body of Christ, until we all attain to the unity of the faith and of the knowledge of the Son of God, to mature manhood, to the measure of the stature of the fullness of Christ, so that we may no longer be children, tossed to and fro by the waves and carried about by every wind of doctrine, by human cunning, by craftiness in deceitful schemes.

There is a lot here: the government of the Church, the different offices, goals and objectives, and the consequences of failure. Now, let’s look at particular points from the passage above. The role of leaders in the institutional church and the role of the “saints.”

What is the goal of local church leaders?

There are five types of leaders named in the passage: apostles, prophets, evangelists, shepherds, and teachers. Some have merged the last two on the list into the same position. Others claim that the prophet role no longer exists. And still, others believe that they are men gifted by the Holy Spirit to this day. While I agree with the latter position, that is not the point to this post. We are more concerned with what these gifts to the Church were supposed to accomplish.

The objective of the leaders towards the people is “to equip the saints for the work of the ministry.” Rushdoony, in his lecture on Laymen and the Church, also pointed to this fact,

If the congregation does not know how to discipline and educate their children, manage their business and financial affairs according to God’s Law, and handle societal challenges in their context, then that institutional church is a failure. As soon as we have abandoned this primary goal and function of the leaders in the institutional church – the training of the laymen for all-of-life ministry – we have abandoned the blueprint for advancing the Kingdom.

The destructive category of “full-time ministry”

We often talk about a “call to the ministry,” or “going into full-time ministry.” The idea is that someone goes into “church work” as their profession, whether a pastor, teacher, evangelist, etc. The main problem is that it goes against the grain of our text above. Who is doing the ministry? The layperson or congregants.

Have you ever heard any of the following?

You could probably list a few variations yourself. These all mean that Sunday morning sermons cater to the least common denominator. Whatever is the least amount of knowledge held by someone, that is what I aim for in a message.

This type of preaching and teaching leads to two things: stagnation and fruitlessness. The common denominator will stay the common denominator, which in this case is the lowest. This type of ministry also results in division. When people lack training in weighty theological truths and the practical application of them, basic theological divisions can grow and fester. Also, the determining factor between obedient and non-obedient Christians shifts to the realm of preference. We’ve seen it too often. Not liking or avoiding people for the way they present themselves (dress, hairstyles, facial hair, etc.); eating habits (eating with fingers, chews with mouth open, makes loud sounds, doesn’t eat healthily, eats too healthy, etc.); occupation; interests; etc. All the while, the weightier matter of the Law are ignored and broken.

The “teaching to the simple” ministry paradigm is a revolt against maturity.

What is the job of the saints?

Well, according to Ephesians 4, the job of the saints is “ministry.” Our life is a calling. Rushdoony, in his lecture on Laymen and the Church, discussed the importance of chaplains on the front lines of warfare. He then talks about how warfare with the unbelieving world must have the ministry of Christ. Who are supposed to be the chaplains Christ’s war against “…rulers, against the authorities, against the cosmic powers over this present darkness, against the spiritual forces of evil in the heavenly places…” (Ephesians 6:12)? Rushdoony comments,

Now, this means that the church must be in the real world, and we can best understand the work of the laymen in the church if we see laymen as a chaplaincy into the world at large. The real world out there is where the church belongs. A layman does not leave the church when he walks out of the building. He is a part of the church, and he must carry Christ into his vocation, into his family, into every aspect of his life. So the role of the layman in the church is as a chaplaincy to the world…To go out and to establish godly principles of life in their homes, in their callings, in every area of life. In politics, economics, agriculture, the sciences, everything.

The congregants are those who go out and bring the ministry of Christ to bear on the culture. If the church is the armory of God, then the laymen are God’s chaplains.

What are the blessings of obedience to Ephesians 4?

If the local institutional church is faithful to Ephesians 4:11-14, then the promised blessings will come. From the passage itself, we see that the body of Christ will:

A training church and its leaders will work to train laymen for ministry. In a sense, they will “work themselves out of a job.” Being a leader like this takes humility. To prevent a terminal church, you must see yourself as having a terminus; that you are replaceable, and that those you train will be better than you.

A training church will:

More suggestions for a training church can be gleaned from a previous article on alternatives to seminary.

If we are to gain back any relevance, we have lost over the last century, or so, then we must not hide our “light” and horde our salt inside the institutional church. Or depend upon it, our churches will die.