The Law of God by William S. Plumer | Chapter 2 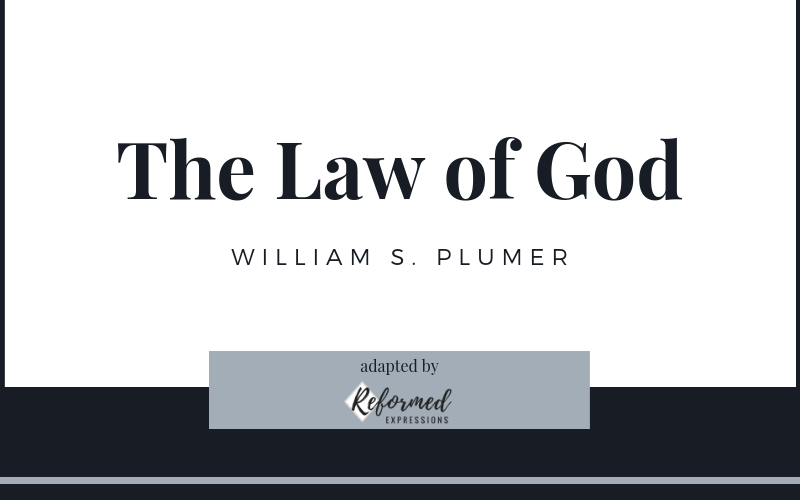 In chapter two of William S. Plumer’s treatment of the Law, the definition of Law is dealt with generally and it’s usage in Scripture. Then the focus narrows to God’s revelation at Sinai. This is actually the first chapter where we get to read Plumer himself, since the first chapter was only quotes from others. How should we define “law”?

“A law is a rule of action laid down or prescribed by a superior.” – Joseph Emerson Worcester

“Law, as applicable to human conduct in general, may be defined as a rule of moral action proceeding from a superior, having right to command, and directed to inferiors bound to obey.” – Edinburgh Review

“Law in its general and most comprehensive sense signifies a rule of action.” – William Blackstone

“A law is that which directs, prescribes, or controls.” – Stowell

“The law is void of desire and fear, lust, and anger. It is mens sine affectu, mind without passion, written reason, retaining some measure of the divine perfection. It does not forbid that which pleases a weak, frail man, but without any regard to persons, commands that which is good, and punishes evil in all, whether rich or poor, high or low. It is deaf, inexorable, inflexible.” – Algernon Sidney

“To every good law be required these properties: that is to say, that it be honest, righteous, possible in itself, and after the custom of the country, convenient for the place and time, necessary, profitable, and also manifest, that it be not captious by any dark sentences, or mixed with any private wealth, but all made for the commonwealth.” – Christopher Saint Germain

“The Moral Law is a divine, unchangeable rule given to man, and accommodated to his nature, as he was created by God, obliging him to serve to God’s glory as his last end.” – Willard

“The Moral Law is that which prescribes to men their religious and social duties; in other words, their duties to God and to each other.” – Noah Webster

“The Moral Law is the declaration of the will of God to mankind, directing and binding everyone to personal, perfect, and perpetual conformity, and obedience thereunto, in the frame and disposition of the whole man, soul and body, and in the performance of all those duties of holiness and righteousness which he oweth to God and man: promising life upon the fulfilling, and threatening death upon the breach of it.” – Westminster Larger Catechism, Q&A 93

A law, then, is a rule of binding force, given by a competent authority. It consists of two parts: first, a precept or direction given; and secondly, a penalty attached, consisting of good ensured to the obedient, or evil threatened against the lawbreaker or both of these. A law without a sanction may be disregarded at pleasure. It is no law. It is mere advice. Blackstone:—”Of all the parts of a law, the most effectual is the vindicatory…The main strength and force of the law consist of the penalty annexed to it.” Promises of good, irrespective of law, are merely gifts. Threatenings of evil, having no reference to law, are but arbitrary expressions of displeasure.

The Hebrew word commonly rendered Law occurs more than two hundred times. It primarily signifies instruction, [and] then precept. In a few cases, it means a custom or manner so established as to form the rule of procedure.

The Greek word rendered Law occurs in the New Testament nearly two hundred times. Primarily it signifies anything allotted or apportioned, then a usage or prescription, then a law.

In the Scriptures, the precise meaning of the word Law varies according to the subject under consideration. In Psalms 1 and 19, it is put for the whole word of God as then written. In Romans 7:23, it twice has the sense of a force governing our actions in our present sinful state. In Romans 2:14, it signifies the law of nature. In John 10:34, and elsewhere, it means the Old Testament. In Galatians 3:11, it is put for the works required by the law. In John 1:17, and elsewhere, it is a name given to the whole of the Mosaic dispensation. The popular usage in Christian countries most commonly signifies the Moral Law containing the ten precepts or words as the Hebrew expresses it.

What Came Down From Sinai

The law given from Mount Sinai consisted of three kinds of enactments:—

1. Ceremonial prescriptions and carnal ordinances. These were very numerous. All the times, and modes, and circumstances of public worship, and all the varieties of cases that could arise under a ritual (even the most minute) are here ordained. If salvation by rites (the most exact, and extensive, and Heaven-appointed) had been possible, certainly it had been by the Mosaic law. It far outdoes all modern devices. Yet it was powerless. It never made the comers thereunto perfect (Hebrews 10:1). Indeed it was an intolerable burden (Acts 15:10). It could not be endured. It has been wholly abolished (Acts 15:28). And yet it had a shadow of good things to come (Hebrews 10:1). Its typical representations of the Messiah were both numerous and instructive. It was abolished by being fully accomplished.

2. Another part of the law given from Sinai related to judicial proceedings. It regulated commerce between man and man. It provided for the establishment of justice and the punishment of crime. Some of its provisions, as the cities of refuge, had a typical reference. Some of them constitute a good part of the foundation of the municipal and judicial rules of all Christian nations. They are not, however, of binding force on us except as they contain the principles of right and equity applicable to all men, or unless they are incorporated into the laws of the state to which we belong. We are not living under the theocracy.

3. The third part of the code given from Sinai is the Moral Law. Very often in Scripture, it is mentioned by way of excellence as The Law. This is the great code by which men’s thoughts accuse or excuse them before God, and by which they will be finally judged.

We included the full names of those quoted that we could find. Roman numerals were changed to our common numerals, and the somewhat awkward Scripture citations were modernized. Grammatical changes and minor vocabulary changes were made for simpler reading.