A gradually increasing bane to the expansion of Christendom is the modern seminary. What was once an excellent tool in the history of the Church has become a pious-bottleneck. The contention of this article is that modern seminaries are a blight, and must either be changed or left in the dust. 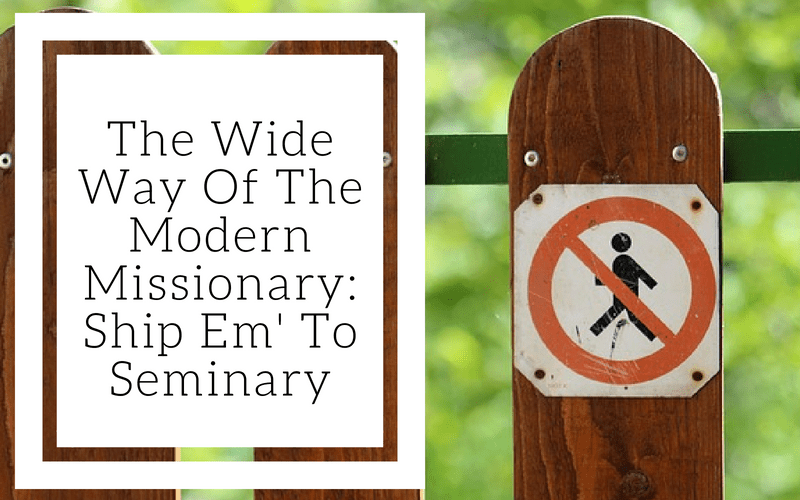 The point of seminary has historically been to train ministers of God’s Word. You would think that after 3-6 years, depending on the academic track, these trained men would be able to go on and replicate themselves through discipleship. As a rule of thumb, this is not the case.

First, many missionaries who graduated from seminary cannot train men to take their place. If they find someone who shows an inkling of a Church leader in the community where they are serving, they send them off to a seminary. Oftentimes the seminary is in the country where the missionary came from, maybe even the same one!

At this point, you might be asking, “So what?”

Think about it. A leader who is not equipped to train others for the ministry is sending qualified men back to the place that failed to fully equip him. And what will those men learn? That it is their job to send others from their home country back to the same seminary. This creates an ongoing cycle of insufficient men to “bless” the modern mission field.

Deporting the best of the best to seminary

The negative effects of modern “missions” keep on rolling. Missionaries take the best, the one promising to be a servant-leader in a local gathering through all their difficulties, and remove them for “training” to be the servant leader they were already becoming.

Second, the seminary deportation program removes a young Titus from his context. Instead of applying the theology he is learning under the missionary amongst his own people, he is ripped out of his context to learn theology in a sterile environment. He is removed from the problems at home, learning how to practice theology in light of problems in a culture different from his own, and he is expected to be the bright and shining leader once he returns. Of course all this under the guidance of the inept missionary who was unable to equip him in the first place.

And what of the people? They now have two men unable to train them to the “fullness of ministry.”

Platform-dependence: A new caste of Pharisees

Third, the near-universal need for modern missionaries to “ship em'” to seminary creates a dependence on a platform that is not required in Scripture. This creates a hedge to Gospel ministry. In effect, we’re saying that in order to have effective Church leadership in a foreign country, we must make sure the leadership gets a certifying piece of paper and takes his exams.

As soon as an extra-biblical platform becomes required for multiplying discipleship, it creates a new type of pharisaism. It is a similar situation when Jesus mentions the “narrow road”:

This is commonly known as the Golden Rule. However, it is often cut off before the first sentence even finishes. But it should be read in context with the other verses. If we don’t understand the difference between the narrow gate and the wide gate, then we can’t follow the Golden Rule. What do the narrow and wide gates have to do with missionaries sending local up-and-coming leaders to seminary? Let’s find out.

Who did Jesus preach to?

Jesus’ sermon was preached openly to the crowds of Israelites. These were not the high and lofty religious leaders of the day. These people were the targets of oppressive rule. One might expect that the oppressive rule that Jesus would point out to the gathered people would be the Romans. You’re in for a surprise.

Who did Jesus preach against?

The oppressive and wicked rulers that Jesus preached against were…the Pharisees! It is fascinating that they are brought up so often. The Sermon on the Mount was not merely a sermon of comfort, conviction, repentance, obedience, etc. Jesus message was also a polemic message.

The drive of the Pharisees

The Pharisees were lawless by twisting God’s Law (Matthew 5:21-48). If you miss this point, then the Sermon on the Mount, the wickedness of the Pharisees, and the polemical nature are lost. For example, many assume that Matthew 5:20 indicates that there was a legitimate righteousness to the Pharisees. However, Jesus is actually pointing out that they are not righteous at all. In fact, simple obedience to God’s Law means one’s righteousness will exceed the scribes and the Pharisees.

What was the ambition of the Pharisees? Righteousness? Obedience to God’s Law? Worship? No, they were being gatekeepers or law-makers. They wanted to make themselves God.

The Pharisees were gatekeepers. They were judging others by their standards, which they thought was a holy hedge to protect God’s Law, yet they did not keep the Law themselves. The Pharisees put gag-orders out to stop the people following Jesus (John 9:20-23). They bought the false testimony of the guards to spread the tale that Jesus’ body was stolen (Matthew 28:11-15).

The narrow path to eternal life was not narrow because of the message itself.

In the context, Jesus is preaching against the false teaching of the Pharisees and speaking to Jews under their religious rule. The wide way to destruction was the way of the Pharisees since they were the ones who sanctioned it. The narrow way meant following Jesus. Not because a small number of people would follow Jesus, but because the Pharisees had narrowed the path (or made it a dangerous one to tread) with their threats of expulsion and death.

Many agencies require potential “co-laborer” to hold accredited Bible degrees. This prohibits many well-studied and gifted men from working out in the field. Sadly, the submission of Christian institutions to state accreditation (which is rooted in humanism) means that many affordable, faithful seminaries and schools who refuse accreditation are discredited even among the Christian community. Another narrow gate built.

Imagine for a moment you are a missionary planting a church in another country. If your denomination requires a Masters of Divinity in order to be a pastor or teaching elder, then isn’t that a sure-fire way to get people from your church plant into your denomination’s seminaries? If they are like any other seminary, then they can boast about all the different nationalities coming from overseas to be trained. A boast that draws many supporters thirsty for a fundraiser. Another narrow gate built.

Another way besides seminary?

Is there a way around the narrow gate? Must we all bow the knee this “missionary idol” in order to advance the Kingdom outside of our home country? Is there a cheaper and more local-focused alternative? We will be discussing the answer to these questions in an upcoming post on how we can knock down gates that open up the narrow way for effective Kingdom growth.