Three Rainbows In The Bible & Their Connection To Christ

God put a rainbow in the clouds after the Flood. In three other places in the Bible, rainbows are also mentioned. Along with every rainbow painted in the sky since, these symbols should have significance in our lives. What is it? Let’s examine the connection between Noah’s rainbow and the three rainbows in the Bible. We’ll find that these colored banners are more fundamental to our faith than we realize. 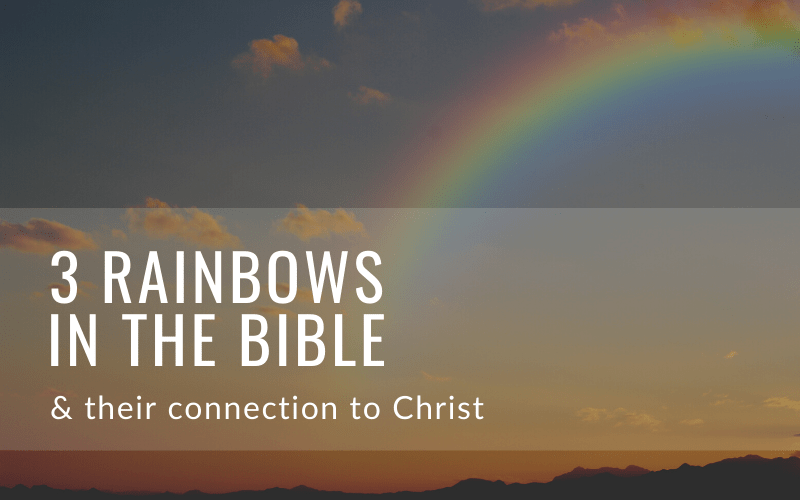 Seeing how both the covenant and its sign receive equal emphasis, it would seem we are encouraged to engage with other mentions of the rainbow to better understand our relationship with God.

Three rainbows in the Bible: Glory, throne, and crown

There are three rainbows in the Bible after the account in Genesis.

On the island of Patmos, John sees “a rainbow around the throne, in appearance like an emerald” (Revelation 4:3).

John will then see another vision of “an angel coming down from heaven, clothed with a cloud. And a rainbow was on his head, his face was like the sun, and his feet like pillars of fire” (Revelation 10:1).

From these verses, there are three applications of the rainbows in the Bible. Let’s look at their significance in our lives.

First, the rainbow is a sign of hope in the aftermath of judgment.

Just like the rainbow in Noah’s day penetrated the clouds of judgment, God’s glory penetrates the dark clouds of sin and its effect on the earth. When tragedies have wrecked havoc in our lives, we can trust that God will restore us. We must remember his promises and that His grace overpowers sin.

Second, the rainbow surrounds the throne of Christ.

It is His filter of judgment upon which He views the world. He sees his people (both obedient and disobedient) alongside rebellious men through the filter of the Covenant of Grace. We must also judge in a like manner. First, we judge as evil those who reject Christ and break His Law. Second, we refuse to associate (1 Corinthians 5:9-13) with those who trample under foot the blood of the covenant (Hebrews 10:29). Lastly, we do not bring judgment against a brother for anything but disobeying God. Or, as Jesus tells us, avoid judging by ‘appearances’ (John 7:24).

Third, the rainbow is the kingly crown of Christ.

Jesus, through His work of redemption, was crowned with a sign of the Covenant of Grace (rainbow). Thus the rainbow reminds us of His sovereignty over our lives. God has the power to destroy the world. And we owe obedience to the One who holds back worldwide deconstruction. As much as the rainbow is a sign of the Covenant of Grace, it doubles as a declaration of complete authority over our lives. We must move under this multicolored banner of Christ by obedience to His Laws that apply to our jurisdiction.