What Does The Bible Say About Community & When Is It Okay To Leave?

A Google search of “what does the Bible say about community” will lead to articles about why we were made for community, the importance of community, how we are commanded to be together with other believers … but none of the most popular articles mention what a healthy community looks like or when it is appropriate for a Christian NOT to be part of a specific community. 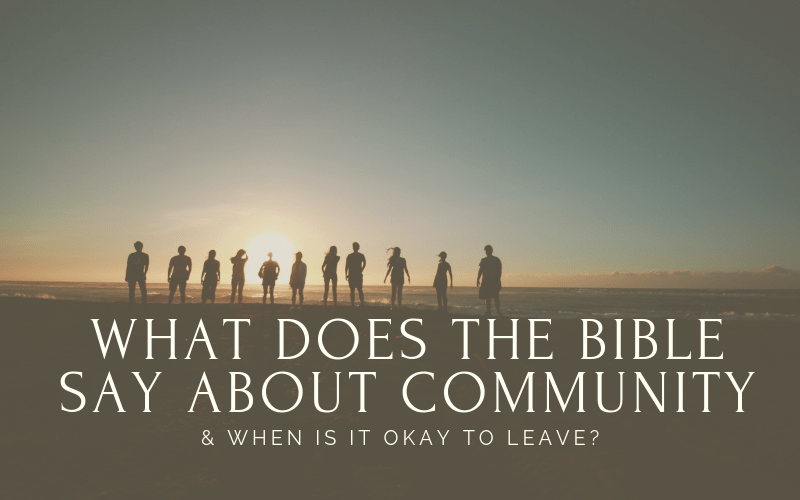 In the social media realm, we find plenty of reasons to unfriend “friends,” leave groups, and block disagreeable associates. And hardly anyone bats an eye at our decisions or reasons. Perhaps a few will voice their regrets that we’ve left, but they quickly move on, scrolling their feeds and commenting on other people’s posts. But in the real world, when is it appropriate for Christians to break relationships and distance themselves from community? It seems the resounding answer in most Christian circles is “never.”

In fact, the one leaving will often be marked as a dissenter, a troublemaker, or “walking in sin.” To avoid these labels of guilt, the departee may disguise their real reasons for leaving or hide behind a neutral statement, “it seemed best for everyone.”

But wouldn’t it be so much healthier if Christians could acknowledge that there are legitimate reasons for separation? If actual problems in communities could be diagnosed and discussed rather than pinning the blame on the one walking out the door, real communities might begin to thrive and grow.

What does the Bible say about community?

Before going any further, we need to discuss what a healthy community looks like. The best model of a healthy community begins with the Trinity – Father, Son, and Holy Spirit. They are always in perfect communion with each other, delighting in and glorifying each other. But we are not God. And even the healthiest Christian community can not always be perfect. So how do we model a community that is healthy and God-glorifying, taking into account our weaknesses and tendencies toward sin?

The answer is simple: by following God’s rules for life as found in His Word.

It makes sense that the One who made us to be in relationship with each other (the union of Adam and Eve as the first example) would also give us a guide on how to make those relationships work and how communities ought to function. The Old Testament and New Testament are full of instructions on how to love our neighbor as ourselves: don’t steal, don’t bear false witness, lend to the poor, etc. A community of believers that strives to follow His instructions will find more enjoyment, peace, and productivity than one that does not.

For the whole law is fulfilled in one word: “You shall love your neighbor as yourself.” But if you bite and devour one another, watch out that you are not consumed by one another. Galatians 5:14-15

What divides a community?

If we begin with the premise that a Christian can have legitimate reasons for leaving and that their leaving doesn’t necessitate division, then, it makes sense that division is instead caused by problems already in the community. Galatians reminds us that division is the result of gratifying the flesh, rather than walking according to God’s Law by the power of the Holy Spirit.

Broadly speaking, our communities are divided when we fail to love others as ourselves and when we follow the way of the flesh instead of God’s Way. Let’s take a look at some of the more specific reasons for division identified in Scripture.

“You covet and cannot obtain, so you fight and quarrel.” James 4:2

“Drive out a scoffer, and strife will go out, and quarreling and abuse will cease.” Proverbs 22:10

“‘Scoffer’ is the name of the arrogant, haughty man who acts with arrogant pride.” Proverbs 21:24

“These have indeed an appearance of wisdom in promoting self-made religion and asceticism and severity to the body, but they are of no value in stopping the indulgence of the flesh.” Colossians 2:23

[And remember that division is one of the works or indulgences of the flesh. See Galatians 5:19-21]

“For if a man wearing a gold ring and fine clothing comes into your assembly, and a poor man in shabby clothing also comes in, and if you pay attention to the one who wears the fine clothing and say, “You sit here in a good place,” while you say to the poor man, “You stand over there,” or, “Sit down at my feet,” have you not then made distinctions among yourselves and become judges with evil thoughts?” James 2:2-4

So when should a Christian separate himself?

Hopefully, the answer is obvious. When a community not only exhibits, but openly permits the “work of the flesh” (anger, greed, covetousness, gossip, etc.), they are no longer a community following God. And it is time for the Christian to part ways.

Do you not know that friendship with the world is enmity with God? Therefore whoever wishes to be a friend of the world makes himself an enemy of God. James 4:4

To be more explicit:

“For people will be lovers of self, lovers of money, proud, arrogant, abusive, disobedient to their parents, ungrateful, unholy, heartless, unappeasable, slanderous, without self-control, brutal, not loving good, treacherous, reckless, swollen with conceit, lovers of pleasure rather than lovers of God, having the appearance of godliness, but denying its power. Avoid such people.” 2 Timothy 3:2-5 (emphasis added)

Rather than discrediting the believer who leaves a disobedient community, we need to extol and encourage him. It was a credit to David that he could say:

“I do not sit with men of falsehood, nor do I consort with hypocrites.” Psalm 26:4

Blessed is the man who walks not in the counsel of the wicked, nor stands in the way of sinners, nor sits in the seat of scoffers. Psalm 1:1

How can I be sure?

When we belong to a community, it can be difficult to disassociate ourselves. We don’t want to leave for the wrong reasons. To help, try to run through these questions as a sort of “litmus test.” These are by no means ultimate standards, but they can help you identify if it’s time to leave a community.

– When works of the flesh manifest themselves, how does the community react?

We see this happening even in secular FB communities – “This group doesn’t allow posts containing malicious or slanderous content. We’ve deleted your post. If you continue, we will have to block you.” Why can’t Christians do this in real life?

– How do those with influence in the community conduct themselves?

A community is made up of many individuals – each one important, but with differing degrees of influence. Some members are designated leaders, while others have natural leadership. Do these members use their influence to encourage the community to walk in the Spirit, or do they exhibit a lack of self-control themselves?

At public functions, do influential members show partiality, spending their time with big-money donors and those of renown? Are they characterized by greed, covetousness, or pride? Rest assured that those who are influenced by them – namely, other members of the community – will at the least ignore their behavior and at the worst, eventually follow their example.

– What are the goals or principles of the community?

If the community is founded on principles of anger, self-made religion or dishonesty, then it can not be expected that the members will act any differently.

We see this with groups formed to “combat” a problem. They are angered or “triggered” and rally around the common desire to do violence against an issue. [Note: this is different from godly anger directed at sin.] Their campaign is characterized by violence, hate, etc. As a result, they are not afraid to use ungodly tactics to achieve their end.

Or perhaps a group wants to promote an issue, becoming Pharisaical in the process. Their issue becomes on par, or even more important, than what the Bible teaches. They may even promise safety, health, and a sense of belonging as a result of supporting their group’s goals.

Lastly, a group that takes the stance, “the ends justify the means” often find themselves resorting to dishonesty. Because they have a godly goal, they don’t need to follow what the Bible teaches to reach that goal. The group may make compromises that are contrary to what the Bible teaches in order to advance themselves. It’s okay to exaggerate about their services in order to get more donations. Employees don’t have to be paid on time – after all, they’re serving God!

One doesn’t have to look far to find these kinds of groups and see the damage and division they’ve left in their wake.

– How are problems in the community handled?

When evidence of works of the flesh are brought to their attention, do the leaders of the group blame others, or do they take responsibility? For example, some leaders will target members, blaming them as “cause of the problem.” They will do what they can to alienate those members and eventually edge them out. Afterward, they will breathe a sigh of relief – the problem is “fixed.”

Responsible, spirit-led leaders will examine themselves first and seek to amend their own, fleshly conduct. Afterward, they will seek to address the community as a whole, making sure that Biblical proceedings are established and followed in dealing with sin (Matthew 18.)

How should a Christian separate himself?

It’s not enough to know when it is time to leave a group or community. As Christians, we need to know how to leave a group in a way that honors God. The simple answer: avoid those things that cause division. We’ve already mentioned that problems in a community aren’t caused by the person walking out the door – they were there already. However, problems can be exasperated by the person walking out the door.

When you leave, don’t be:

Ultimately, if we don’t walk with the Lord as individuals, we can’t expect our communities to flourish. As we look at these things that divide communities, we need to check our own hearts first. When we do identify works of the flesh in our communities, we can be patient, but we shouldn’t be passive. In the end, whether we refuse to leave or we try to keep the community together artificially, the community will reap what it has sown. And we will be dispersed along with it.

Let us therefore strive to enter that rest, so that no one may fall by the same sort of disobedience. For the word of God is living and active, sharper than any two-edged sword, piercing to the division of soul and of spirit, of joints and of marrow, and discerning the thoughts and intentions of the heart. And no creature is hidden from his sight, but all are naked and exposed to the eyes of him to whom we must give account. Hebrews 4:11-13 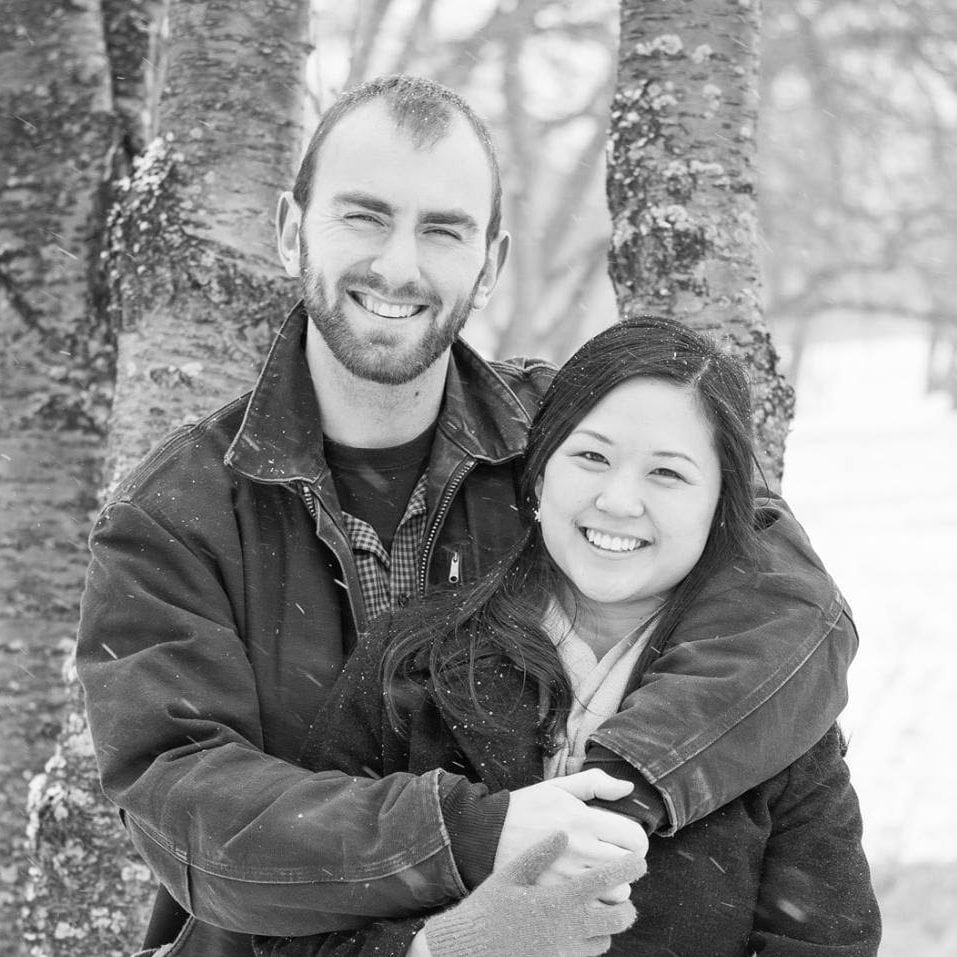